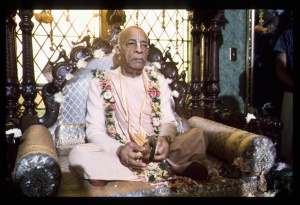 Translation: (07:20) "Lord Ṛṣabhadeva's hands, feet and chest were very long. His shoulders, face and limbs were all very delicate and symmetrically proportioned. His mouth was beautifully decorated with His natural smile, and He appeared all the more lovely with His reddish eyes spread wide like the petals of a newly grown lotus flower covered with dew in the early morning. The irises of His eyes were so pleasing that they removed all the troubles of everyone who saw Him. His forehead, ears, neck, nose and all His other features were very beautiful. His gentle smile always made His face beautiful, so much so that He even attracted the hearts of married women. It was as though they had been pierced by the arrows of Cupid. About His head was an abundance of curly, matted brown hair. His hair was disheveled because His body was dirty and not taken care of. He appeared as if He were haunted by a ghost." (break)

Prabhupāda: So God's body (break) is not material. Caitanya Mahāprabhu has said, prākṛta kariyā māne viṣṇu-kalevara aparādha nāhi ara inhāra para (CC Adi 7.115). Anyone considering the body of Viṣṇu or Viṣṇu-tattva—Kṛṣṇa, Ṛṣabhadeva . . . They are not material body. A further description will be there—even the stool and urine also transcendental.

So we cannot conceive in our present stage what is the difference between prākṛta and aprākṛta. The description in the śāstras we have to accept. Just like practically Kṛṣṇa, when He was in the Battlefield of Kurukṣetra, He was great-grandfather. His grandchildren also had sons. It is said that the whole family of Kṛṣṇa consisted of about one crore of living entities, Yadu-vaṁśa, very big family. So grandchildren, their children, their children, like that . . . But still, Kṛṣṇa was looking just like a boy of sixteen to twenty years. That is aprākṛta. Advaitam acyutam anādim ananta-rūpam ādyaṁ purāṇa-puruṣaṁ nava-yauvanaṁ ca (BS 5.33). This is the description. He is the oldest person because . . . Kṛṣṇa says, aham ādir hi devānām (BG 10.2). Even Brahma, Lord Śiva, they also are born of Him. Prapitāmahā. Brahmā is called Pitā-mahā, and Kṛṣṇa is described, Prapitāmahā (BG 11.39). So He is the father of Brahma; still, advaitam acyutam anādim ananta-rūpam ādyaṁ purāṇa-puruṣam—the oldest. Because Brahmā is the first living being within this material world . . . First Brahmā was created in the lotus flower from Garbhodakaśayī Viṣṇu, so Brahmā is the first creature, living creature, but he also is born of Viṣṇu. Therefore Kṛṣṇa said, aham ādir hi devānām (BG 10.2). Then Brahma, Lord Śiva was born, Rudra. In this way, Viṣṇu or Viṣṇu-tattva, that is original. Sarva-yoniṣu kaunteya sambhavanti mūrti . . . ahaṁ bīja-pradaḥ pitā (BG 14.4). Still, He is nava-yauvanaṁ ca. Nava-yauvanam means it begins from the sixteenth year. He looked like that, a boy of sixteen to twenty years old, and . . . This is only description of His transcendental body, sac-cid-ānanda vigrahaḥ (BS 5.1).

This is the difference between material body and spiritual body. It doesn't matter. The Māyāvādīs, they cannot think of, that material body can be so beautiful, neither they can think of that the Supreme to possess a body . . . But He possesses body. The description of the body is there. But it is not like our body. Therefore nirākāra means His body, ākāra, or form, is not like ours. That is to be understood. He is sac-cid-ānanda-vigrahaḥ. Īśvaraḥ paramaḥ kṛṣṇaḥ sac-cid-ānanda vigrahaḥ (BS 5.1). Vigraha means body. He has got body, but not a body like ours. That is misunderstanding. Advaitam acyutam anādim ananta-rūpam (BS 5.33). And He expands His body into millions of other bodies. Just like when Kṛṣṇa was present upon this earth, He married sixteen thousand wives, and He expanded Himself also into sixteen thousand forms. And each and every form is differently engaged. Nārada was astonished when he heard that Kṛṣṇa has married sixteen thousand wives, and with each and every wife He is differently engaged. That he saw. These descriptions are there in the Śrīmad-Bhāgavatam. Somewhere He's engaged some way; in another place, in the . . . Arjuna, Nārada saw that although He has expanded, but He is differently engaged. Another example is there: when Lord Brahmā stole away, moved all the cows, calves, cowherd boys, He immediately expanded Himself into so many cowherd boys, cows, calves. He's complete always. Pūrṇasya pūrṇam ādāya pūrṇam evāvaśiṣyate (Śrī Īśopaniṣad, Invocation). That is God. That is Kṛṣṇa; not that like ourself. He can expand Himself—ananta-rūpam. Still, He is there; the body is not finished. We cannot conceive. Suppose my body is cut into pieces and thrown. Then where is my body? This is material conception. But spiritually, if my body is cut into thousands of pieces, still I'll remain.

So we cannot understand what is a spiritual body at the present moment. We have to hear from the right source, Vedic knowledge. That is Vedic knowledge. Everything described about God, Kṛṣṇa, at the present moment is inconceivable. We cannot imagine. Long, long ago I was talking with one Ārya-samajī friend. So he did not believe that a lotus stem can grow on the navel of Viṣṇu and there is Brahmā born. Everyone says like that, "Mythology." It is not mythology; it is fact. I asked him that "Here we see one coconut tree, and about sixty feet above, there is coconut and there is water, there is pulp, and it is being carried from the ground. Where is the pipe? Where is the pump? How the water is there within the coconut? Can you explain?" So he could not explain. And I said that "Even in material things which is in front of you, you cannot explain. How you will explain the spiritual position? How the lotus grown from the navel of . . .?" Therefore it should be accepted as inconceivable. Acintyāḥ khalu ye bhāvā na tāṁs tarkeṇa yojayet (Mahābhārata, Bhīṣma parva 5.22). Don't try to argue; it is foolishness. It is inconceivable.

So, so many things, these rascals they do not believe, atheists. When things are described about God which is not conceivable by us, they say, "It is mythology. It is imagination." But that is not the fact. The fact is that Kṛṣṇa or Kṛṣṇa's incarnation, They have got spiritual expansion. Sambhavāmy ātma-māyayā (BG 4.6). Ātma-māyā. Kṛṣṇa said, "I appear in My spiritual potency." We . . . Our body is not ātma-māyayā. It is given by māyā. That is stated in the Bhagavad-gītā:

This is the fact. We have got this yantra, machine. This body is a machine, that's a fact. But this machine, we are accepting as self—"I am this machine." This whole world is accepting—"I am this body." "I am Hindu," "I am Muslim," "I am Christian," "I am American," "I am Indian," "I am black," "I am white." No. Therefore Kṛṣṇa said in the beginning that "You are not this body." Dehino 'smin yathā dehe kaumāraṁ yauvanaṁ jarā (BG 2.13). This change of body is different. That is on the body. At different times we are accepting different body. So we are not this body. But that is not possible for Kṛṣṇa. Kṛṣṇa and Kṛṣṇa's body—the same. These foolish persons, they do not know. Therefore avajānanti māṁ mūḍhā mānuṣīṁ tanum āśritam (BG 9.11). These mūḍhas, these rascals, they think that Kṛṣṇa has got a different body. No. Kṛṣṇa hasn't got different body. We are given this body by māyā. Māyayā. Bhrāmayan sarva-bhūtāni yantrārūḍhāni māyayā (BG 18.61). We are sometimes getting a human form of body, sometimes a tree's body, sometimes a demigod's body, sometimes an insect's body. Karmaṇā daiva-netreṇa jantor dehopapatti (SB 3.31.1). By karma we are getting, we are forced to accept a certain type of body. You cannot say, "No, I don't want." That is not possible. "You have behaved like a dog. You got this human form of life for chanting Hare Kṛṣṇa mantra; instead of doing that, you have cheated. You have misused your opportunity like a dog and hog. You must accept." This is nature's law. Yaṁ yaṁ vāpi smaran bhāvaṁ tyajaty ante kalevaram (BG 8.6). We, by practice, we may be . . . appearance like a human body, but my mentality is just like a dog. I don't discriminate, yona-vicāra(?). I don't discriminate about eating. I eat everything, even up to stool like . . . That is going on.

So this is misuse of the human form of body, and as soon as we misuse, we are given by nature's law an opportunity. Yantrārūḍhāni māyayā (BG 18.61). Suffering, suffering, suffering, 8,400,000 forms of body, and we get . . . Aśītiṁś caturamś caiva jīva-jatiṣu. That is stated in the śāstra. This is an opportunity to understand Kṛṣṇa. This is human form of body. And if we don't accept Kṛṣṇa or don't try to understand Kṛṣṇa . . . We must try. This is our business. Then we are misusing. Then māyā is there. Māyā is there means the laws are so automatic, māyā's law, that as soon as you do something, immediately the next stage is ready. The māyā hasn't got to do anything. Just like if you infect some disease, the next stage—then you must suffer from that disease. It is automatic, not that māyā has to come, and he has to convince you, "Sir, you have infected smallpox. Now you suffer from this smallpox." No. Automatically it takes. Prakṛteḥ kriyamāṇāni guṇaiḥ karmāṇi sarvaśaḥ (BG 3.27). Everything is going on systematically. You cannot change. That is called destiny.

Destiny means that so long we are under the laws of nature, that is to happen. You cannot change it. That is not possible. Only . . . Such law can be changed by the Supreme Personality of Godhead. Therefore Kṛṣṇa says, ahaṁ tvāṁ sarva-pāpebhyo mokṣayiṣyāmi (BG 18.66). You cannot. That is not possible. Nobody can do it. If you have done something wrong, sinful, you must suffer. There is no escape. But He can do that. Just like if you are condemned by the law court to be hanged, nobody can change it. Even the judge who has given you the punishment, even if you appeal to him, "Sir, excuse me," no, he cannot excuse you by law. But if you file petition to the president or the king—that is called king's mercy—he can change. Similarly, whatever we are doing, we must enjoy or suffer. There is no question of enjoyment. When there is birth, death, old age and disease, where is enjoyment? There is no enjoyment. Duḥkhālayam aśāśvatam (BG 8.15). This is a world of suffering. Kṛṣṇa says, duḥkhālayam aśāśvatam. You cannot . . . There is no question of enjoyment. But because we are in māyā, suffering we are accepting as enjoyment. Suffering is accepted as enjoyment. This is called māyā.

So forgetfulness. That is forgetfulness. We are suffering. Therefore Ṛṣabhadeva said—we have already studied that—na sādhu manye yata ātmano 'yam asann api kleśa-da āsa dehaḥ (SB 5.5.4). The mode of life which we are leading, it is not good. It is foolishness that we simply wasting our life like the animals—āhāra-nidrā-bhaya-maithunaṁ ca—and for maithuna and sense gratification we are doing everything like a madman. Nūnaṁ pramattaḥ kurute vikarma yad indriya-prītaya apṛṇoti (SB 5.5.4). Only for sense gratification we are acting like madmen. So Ṛṣabhadeva said . . . We have already . . . Na sādhu manye yata ātmano 'yam: "This is not good behavior." The same thing repeated by Narottama dāsa Ṭhākura:

"My Lord, I have wasted my human form of life for nothing, for no purpose." Why? "Now, I got it to understand Kṛṣṇa, but I did not do that." Manuṣya janama pāiyā, rādhā-kṛṣṇa nā bhajiyā jāniyā śuniyā. This kind of activities have been described as drinking poison knowingly. So we should not do that. We must take to Kṛṣṇa consciousness and become fully Kṛṣṇa conscious. Then our life is successful.

So by trying to understand the śāstra, especially Śrīmad-Bhāgavatam, amalaṁ purāṇam, we get ideas of the Supreme Personality of Godhead. Bhaktyā mām abhijānāti (BG 18.55): we can understand Kṛṣṇa through this process of devotional service. Otherwise it is not possible. So Vyāsadeva has given us this book.

So you read this satvata-saṁhitā very carefully, then anartha, this unnecessary changing of body, will be stopped.