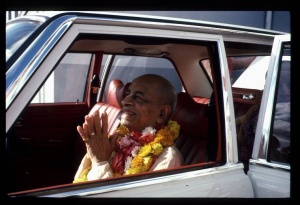 (03:31) "Sūta Gosvāmī said: O brāhmaṇas, King Yudhiṣṭhira fully supported the statements of the Queen, which were in accordance with the principles of religion and were justified, glorious, full of mercy and equity, and without duplicity."

Translation: (04:36) "The younger brothers of the King, Nakula and Sahadeva; and also Sātyaki and Arjuna; the Personality of Godhead Lord Śrī Kṛṣṇa, son of Devakī; and the ladies and others all unanimously agreed with the King." (break)

So, bhagavān devakī-suta. Bhagavān. People may inquire, "What kind of Bhagavān He is? He has taken birth as the Devakī-suta. Any ordinary man, he takes birth as the son of such and such gentleman or such and such mother. So what kind of Bhagavān He is?" Therefore we have to understand how Kṛṣṇa . . . Kṛṣṇa is Bhagavān. Kṛṣṇas tu bhagavān svayam (SB 1.3.28). He appears as the son of Devakī or Vasudeva. We have to know this. And if you can know, then you become immediately liberated. Our business is liberation. This is our main business. What is the purpose of getting this opportunity of human life? That we must understand. We should not waste our valuable life like the cats and dogs. This is our main business, to understand God. Athāto brahma jijñāsā. This is the life. Brahman, paraṁ brahma. Brahman, paraṁ brahma, or, Brahman's, I mean to say, potencies. Parasya brahmaṇaḥ śaktiḥ (Viṣṇu Purāṇa). These things are there. We should understand. That is our business. So if we understand why Bhagavān appears as the son of Devakī, then you become liberated. This is the . . . Bhagavān says, janma karma ca me divyaṁ yo jānāti tattvataḥ (BG 4.9). You have to learn it tattvataḥ, in truth, not superficially. Then you'll understand how the Supreme Personality of Godhead, Bhagavān, appears as the son of Devakī or son of Vasudeva. Ajo 'pi sann avyayātmā bhūtānām īśvaro 'pi san (BG 4.6). Although He's aja—aja means who never takes birth—still, He takes birth. Contradictory. This is inconceivable.

Unless God has got inconceivable energy, He's not God. This has been discussed by Jīva Gosvāmī. If you do not accept inconceivable energy of God, then there is no God. This is inconceivable. Ajo 'pi sann avyayātmā bhūtānām īśvaro 'pi san, sambhavāmy yuge yuge (BG 4.6). Paritrāṇāya sādhūnām. This is God. How it happens, how it is possible, if you understand properly, then you become liberated simply by understanding this, that Bhagavān, why He shall not appear as the son? Why you shall restrict? God is not under your restriction. That is God. If He becomes under your rules and regulation, then He's not God. That is inconceivable. How ajo 'pi, although unborn, how He takes birth. Ajo 'pi sann avyayātmā bhūtānām īśvaro 'pi. Bhūtānām īśvaraḥ. He's the supreme controller, but He likes to be controlled by Mother Yaśodā. Bhūtānām īśvaro 'pi san. He controls everyone, but why He accepts one lady, innocent lady, not very educated, not Vedāntist; a village lady, interested in churning curd and butter, not Vedāntist? And He has become just like a very affectionate son of this village lady: "Mother, let Me suck your breast."

So this is God's pastimes. Ajo 'pi sann avyayātmā. He is eko hi, bahūnāṁ vidadhāti kāmān. He is supplying the necessities of life to all the living entities. Nityo nityānāṁ cetanaś cetanānām eko yo bahūnāṁ vidadhāti kāmān (Kaṭha Upaniṣad 2.2.13). But He is begging from Mother Yaśodā, "Kindly allow Me to suck your breast." And when mother refuses, He becomes angry. He breaks the pot of butter and so on, so on. You know this. This is called transcendental pastimes. But at the same time, when it is required, He immediately lifts the Govardhana Hill. Immediately. Although He is dependent on Mother Yaśodā, Nanda Mahārāja . . . Nanda Mahārāja is seeing, "Oh, this little boy has lifted Govardhana Hill? Oh! How it is possible? Let me help." He's trying to help Him by sticking the stick on the Govardhana Hill that it may not fall down. You see? He has already lifted. Still, because father, affectionate, he's thinking, "The childish boy, He has lifted the Govardhana Hill. It may now fall down. Let me help Him." This is going on. This is called transcendental pastimes.

And those who are not devotees, they cannot understand, that "How it is possible?" They say it is, what is called, mythology. It is mythology. It is not mythology; it is fact. Vyāsadeva, such a learned person, vidvān—lokasyājānato vidvāṁś cakre sātvata-saṁhitām (SB 1.7.6); he is vidvān—he has written this sātvata-saṁhitā with some mythology, some fiction, some imagination? It is rascaldom to consider it like that. It is not mythology; it is fact. That is Bhagavān. He has wasted his time to describe some mythology? But they have no common sense. And not only that—Vyāsadeva has written. Later on all big, big commentators like Śrīdhara Svāmī, Vijayadhvaja, Vīrarāghavācārya, Viśvanātha Cakravartī Ṭhākura, Sanātana Gosvāmī, many, they have never said that this is mythology. Never said. Never said. You'll not find in any of the comments of these big, big stalwart ācārya. Vīrarāghavācārya, he is very learned scholar belonging to the Rāmānujācārya-sampradāya. They have never said it is mythology. Where do you get this idea of mythology? That is possible. God is all-powerful. He can do anything. He can appear. Why should you restrict Him not to become the son of Devakī? Why should you restrict? Is He under your control or you are under His control? He can become the Devakī-suta. He can become a small child to be chastised by Mother Yaśodā. He likes it. Everyone offers Him with reverence all respect. Nobody dares to restrict Him and chastise Him. Nobody goes to God, that "You cannot do this. You are fool. You are rascal." Nobody says. But still, He wants to hear all this. That is a pastime.

Just like a big, rich man. He eats so many nice things. But sometimes he says, "Give me some puffed rice." Puffed rice is not his food, but he likes sometimes. Similarly, everyone prays to God with reverence and vow and obedience, but He wants to be chastised sometimes. That chastisement, from where this chastisement will come? It will come from His devotee, not ordinary. If ordinary man chastises, imitating Yaśodāmayī, he will be offender. He will be punished. But where He agrees to be chastised, "Mother, you chastise Me," that is bhakti. That is devotional service. So there is nothing extraordinary when it is said here, bhagavān devakī-suta. He can become Devakī-suta. It is His mercy.

So we have to understand that, how Bhagavān, ṣaḍ-aiśvarya-pūrṇa. Bhagavān means ṣaḍ-aiśvarya-pūrṇa. Aiśvaryasya samagrasya vīryasya yaśasaḥ śriyaḥ (Viṣṇu Purāṇa 6.5.47). All powerful. He can appear anywhere, without any restriction. But still, He appears as Devakī-suta. Janma karma ca divyaṁ me yo jānāti. We have to understand through the śāstra. And that tattvataḥ understanding is possible only through bhakti, not by any other means. Not by jñāna or yoga. That is not possible. It is simply through . . . Bhaktyā mām abhijānāti yāvān yaś cāsmi tattvataḥ (BG 18.55). The jñānīs, yogīs . . . Karmīs, they are third class; they cannot. The yogīs, the karmīs, er, jñānīs, yogīs, they have got spiritual advancement, but still, until they come to the platform of bhakti, it is not possible to understand. Janma karma ca me divyaṁ tattvataḥ (BG 4.9).

So if we want to understand Kṛṣṇa, Bhagavān, in truth, then we have to take the path of bhakti. No other means will help us. Bhaktyā mām abhijānāti yāvān yaś cāsmi tattvataḥ (BG 18.55): how He becomes Devakī-suta, how He . . .

Then the statement of Draupadī was accepted by all the gentlemen or the kings. Everyone accepted. And they considered, dharmyaṁ nyāyyaṁ sakaruṇam. Just like even in judgment . . . The other day I told you the judgment given to a murderer. There must be some consideration, sakaruṇam. Sakaruṇam means mercy. Not that . . . Because one has committed murder in a fanatic condition, he is excused sometimes. That is sakaruṇam. The judgment should be given not simply on the superficial causes. Everything should be con . . . Dharmyaṁ nyāyyaṁ sakaruṇaṁ nirvyalīkam. Suppose a child commits something wrong. He is not punished. A brāhmaṇa, a brāhmaṇa never commits any sinful activity. If he, sometimes in an unnatural condition, if he does something, so he should be excused. This is Vedic law. The woman, the brāhmaṇa, the child, the cow and?

Prabhupāda: Old men. Yes. They should be excused. That is,

So, mahājano yena gataḥ sa panthāḥ (CC Madhya 17.186). Mahārāja Yudhiṣṭhira is dharma-suta. He is not ordinary person. He is the son of Dharmarāja, Yamarāja. Mahārāja Yudhiṣṭhira's mother, Kuntī, had the power to call any demigod. She got this benediction from Durvāsā Muni. So he (she) had his (her) three sons—means Mahārāja Yudhiṣṭhira, Bhīma and Arjuna. She got Mahārāja Yudhiṣṭhira from Dharmarāja, Arjuna from Indra, and Bhīma from Varuṇa, Vāyu, yes. Similarly, still she is one of the chaste women. These things are there. But still, they are not polluted. But in the Kali-yuga these things are prohibited. Devareṇa sutotpattiṁ kalau pañca vivarjayet (CC Adi 17.164). In the Kali-yuga people are very much polluted. They cannot transgress. This is not transgression; this is powerful. Just like you are prohibited to go to the filthy place. Prohibited. But the sunshine goes. Sunshine goes. Sunshine is not prohibited, that "Here is a filthy place, lavatory. Sunshine, you do not come here." No, sunshine doesn't require your permission. It can go anywhere. But it is not polluted. Tejīyasāṁ na doṣāya (SB 10.33.29). One who is tejī . . . Don't try to imitate tejī. You must become tejī. Then . . . Just like for Bhagavān everything is perfect. Apāpa-viddham. Bhagavān is never affected by any so-called sin. For Him there is no sinful activities. Apāpa-viddham. You'll find in the Īśopaniṣad, there is the mantra, Vedic mantra. And if you think, consider, that "Kṛṣṇa is doing so many things, this is sinful." No. Therefore God is always good. "God is good." There is a common word. Even if you see that He is doing something wrong, that is not wrong; that is right. Tejīyasāṁ na doṣāya (SB 10.33.29). He's so powerful, for Him there is no wrong. He's never wrongdoer.

Therefore devotees, they do not expect that "Kṛṣṇa will always be very kind upon me." He may be harsh, but that is also good. Kṛṣṇa or Kṛṣṇa's devotee, even he is harsh, he is unkind, so-called unkind, it is also good. Just like Nārada Muni cursed the Yamalārjuna. What is that? Their name? The Vidura's sons? They were cursed to become tree, but what was the result? The result was that although they became trees, they were fortunate enough to see Kṛṣṇa personally. So God or His devotee, Kṛṣṇa and Kṛṣṇa devotee, you should always take that they're always good. God is good, and the devotee is good. Either we see that He's merciful . . . He's always merciful. Therefore devotees never take anything as not merciful. Tat te anukampām. They take everything from Kṛṣṇa as sympathy, anukampā. Tat te 'nukampāṁ su-samīkṣamāṇaḥ (SB 10.14.8). One who can see this anukampā in reverse condition of life, the compassion of the Supreme Personality of Godhead, mukti-pade sa dāya-bhāk, his right to become liberation becomes guaranteed. If anyone accepts the mercy of God in any circumstances, and he does not do anything wrong to anyone, such person is guaranteed to be liberated. That is the injunction of the śāstra.