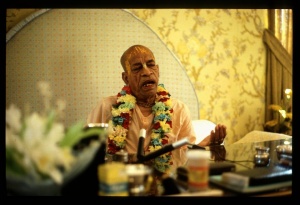 So all of them, all the demigods, they wanted to pacify. The Lord was very angry, but they failed. Then, at last, they requested Lakṣmījī to pacify the Lord. She could not dare to approach, what is the speaking of pacifying? Then, at last, they decided that "This five-years-old boy, the Lord may be compassionate upon him. And for him He has appeared, so let him be engaged in pacifying the Lord." So Brahmā, the head of all the demigods presented there, he decided, prahlādaṁ preṣayām āsa. He pushed him forward: "My dear Prahlāda, my dear son, better you go forward and pacify." It is something like, to push a little child in the cage of the lion. It is something like that. Nobody dared. So Prahlāda Mahārāja, he knew very well that "However ferocious He may be, I am not afraid. He is my Lord. I am not afraid." He was jolly, innocent, pure devotee. He had no fear. So he was sent: "My dear Prahlāda, you try."

So brahmā avasthitam antike. He was very near sitting, but he had no fear. Just on the lotus feet, near the lotus feet of the Lord, he was sitting. Others were contemplating. He was free, that "I am under the shelter of the Lord." Svapāda-mūle, mahat-padaṁ puṇya-yaśo murāreḥ (SB 10.14.58): "He is Murāri, and everything is under His feet." This is the conclusion when one is advanced in Kṛṣṇa consciousness. Prahlāda Mahārāja, although he was a boy of five years old, it did not matter. He was first-class devotee, maha-bhāgavata. That is possible. The devotional service is nothing material; it is spiritual. So there is nothing impossible, impossible. That is real appreciation of spiritual life. If one thinks that "Prahlāda Mahārāja was only five years old. How he could offer such nice verses in glorifying the Lord?" that is possible. Bhakti does not depend on the age. Bhakti depends on sincerity of service. It is not that because one man is older than me, therefore he will be greater devotee. No. Ahaituky apratihatā (SB 1.2.6). First of all, bhakti must be without any motive, without any motive of personal sense gratification. That is real bhakti. Anyābhilāṣitā-śūnyam (Bhakti-rasāmṛta-sindhu 1.1.11). We have to make all our desires zero. Jñāna-karmādy-anāvṛtam. People are trying to understand the whole creation by knowledge, but bhakti does not depend on knowledge. Jñāna-karma . . . Or karma. Karma means fruitive action. Not that because you are a very big businessman, you are very successful, therefore it will be easy for you to understand Kṛṣṇa. No. That is not possible. Or if you think one is very poor in knowledge, lowborn, no education, still he can understand bhakti and Lord, provided he is pure devotee.

So material conditions, they are not practically applicable to spiritual life. Śrī Caitanya Mahāprabhu, therefore, He said, eho bāhya āge kaha āra (CC Madhya 8.59). Whatever Rāmānanda Rāya was proposing, "This is the beginning of bhakti . . ." He suggested varṇāśrama-dharma, karma-tyāga, karma-sannyāsa, even full surrender, sarva-dharmān parityajya (BG 18.66). All, everything, Caitanya Mahāprabhu said, eho bāhya āge kaha: "These are external formality. If you know something better than this, please explain." So Rāmānanda Rāya, when, I mean to say, quoted a verse from Brahma's prayer, sthāne sthitāḥ śruti-gatāṁ tanu-vāṅ-manobhiḥ prāyeṇa ajita api jito . . . (SB 10.14.3). Kṛṣṇa is ajita. Nobody can conquer Him. Kṛṣṇa says in the Bhagavad-gītā, mattaḥ parataraṁ nānyat (BG 7.7). Nobody is greater in every respect. Not that "Kṛṣṇa is shorter at least in this respect." He is shorter in one respect, that He could not repay back the obligation He received from the gopīs. He was only shorter to the gopīs. That is His grace. He said that "I cannot repay you. It is impossible. Please be satisfied with your own service." That is the gopīs. So He was shorter always, especially before Rādhārāṇī. He felt Himself shorter. Otherwise He is the Supreme. He is always the Supreme. Mattaḥ parataraṁ nānyat kiñcid asti dhanañjaya (BG 7.7). So if you want to conquer over this unconquerable Kṛṣṇa, then, according to the prayer of Brahmā and appreciated by Lord Caitanya Mahāprabhu, that sthāne sthitāḥ śruti-gatāṁ tanu-vāṅ-manobhiḥ: "You remain in your place, it doesn't matter, but you become very humble. Don't be puffed up." Jñāne prayāsam udapāsya namanta eva. You should not think yourself that you are very advanced: "By my speculative knowledge I can understand God." That is mistake. That is not possible. You have to give up first of all this attempt, that "I am very learned," "I am very rich," or "I am very this and that. Therefore for me to understand God, it is nothing." They think like that. Janmaiśvarya-śruta-śrībhiḥ (SB 1.8.26). Those who are very much proud, they do not take Kṛṣṇa consciousness very seriously. They think, "These poor fellow who had no money, no foodstuff, they have come in the name of Kṛṣṇa for begging. So it is for them. It is not for us. I am very rich. I am very opulent. I am very educated. I am very aristocratic. So for me there is no need of." The Indians say like that in your country: "Now we have known this Kṛṣṇa, Hare Kṛṣṇa. We have . . . Now it is not needed. Now it is technology."

So these puffed-up persons cannot understand Kṛṣṇa. One has to become very humble. Christ also says, "The kingdom of God is for the humble and the meek." That is actually . . . And Kṛṣṇa also says, sarva-dharmān parityajya mām ekaṁ śaraṇaṁ vraja (BG 18.66). This is the beginning of humbleness: "Yes, I have nothing, insignificant." Bahūnāṁ janmanām ante jñānavān mām (BG 7.19). This is real knowledge, to remain always insignificant before guru, Kṛṣṇa. Then it is profit. If somebody thinks that "I have become more than my guru, more than Kṛṣṇa," then he is finished. So one should become very humble and meek. It doesn't matter where he is situated, either this institutionally, brahmacārī, gṛhastha, vānaprastha, sannyāsa. Even one has taken sannyāsa, he should remain always humble. So never we should think that "I have become very big personality." That was the instruction of my Guru Mahārāja, that baḍa vaiṣṇava—"I am very big Vaiṣṇava. Everyone should come and obey my orders"—this is condemned position. The real position is one should be very humble and meek. Jñāne prayāsam udapāsya namanta eva (SB 10.14.3). Namanta means humble. One should be prepared to learn from namanta eva san-mukhari, those who are pure devotee. From them one should be very much anxious to hear. That, the same thing, anyābhilāṣitā-śūnyaṁ (Bhakti-rasāmṛta-sindhu 1.1.11). Who has no other desire in the material world except to serve Kṛṣṇa, he is pure devotee.

So one should be anxious in humbleness to hear from such personality. Sthāne . . . It doesn't require to change. There are so many questions sometimes: whether it is necessary to take sannyāsa and . . . It is . . . By the routine work, it is necessary. But if one is serious, so for him it is not necessary—ahaituky apratihatā—because for a serious student of devotion, Kṛṣṇa is in his hand. So anyway, even if you are a sannyāsī or gṛhastha or vānaprastha, it doesn't matter. You should remain very humble. That is required. Sthāne sthitāḥ. And you should hear from the realized soul in humbleness. Then the Kṛṣṇa, the great, He will be conquered by you.

So Prahlāda Mahārāja was that type of mahā-bhāgavatam. He was not . . . As a child, he had . . . He did not know the sophistry or formality to become unnecessarily very prestigious. He was by nature a small boy. Just like here, these boys: If you insult, he doesn't care for it because he is child. Or if you praise him, he does not think himself very much puffed up. This is child's nature. So Prahlāda Mahārāja was in that position. He didn't care. His father wanted to chastise him in so many ways. He didn't care. He always thinking, "He is my father. He is joking, that's all." This is simplicity. This is simplicity. This simplicity is very valuable. So Prahlāda Mahārāja was in that position. Therefore Brahmā selected him, that "My dear Prahlāda, my dear child, please approach the Lord. You can try to pacify Him." Prahrādaṁ preṣayām āsa brahmāvasthitam antike, tāta: "My dear child, my dear boy," tāta praśamayo upehi, "please go forward and try to pacify Him." Sva-pitre kupitaṁ prabhum: "Our Lord, Prabhu, He has become very, very angry." Nobody can excess in His anger. Just like nobody can excel the Supreme Personality of Godhead in anything, similarly, when He is angry, nobody can excel Him. He becomes so angry. So He is always . . . "God is great" means great in everything. When He is angry, nobody can excel Him in His anger. And when He is very peaceful, nobody can excel Him. This is God. Asamaurdha.

God means nobody is equal; nobody is greater. So when the Lord was angry, nobody can show His anger equally and nobody can become greatly anger or more greatly angry than Kṛṣṇa. He is always topmost. This is . . . So such anger was exhibited. Why? Now it is said, sva-pitre kupitam. He's inducing, Brahmā inducing, that "We never seen the Lord so angry, but it is on account of your father, so it is your duty. You go there." (chuckles) The child will accept, "Yes, my father committed so many offenses. Therefore it is my duty to pacify the Lord." Therefore he is reminding because he was a child, "My dear child, it is for your father He has become so angry, so it is your duty. Go and pacify Him." So every word in Bhāgavata, there is meaning. Sva-pitre kupitaṁ prabhum: "Don't think that it is our duty; it is your duty. Although we are Brahmā, Lakṣmī, all right. So real duty is yours." This is little joking.

So Prahlāda Mahārāja is prepared, "All right," either for his father or for everyone. That is Vaiṣṇava. Vaiṣṇava does not consider that "I have to pray to Kṛṣṇa for my father, for my mother." No. Vaiṣṇava is ready to offer prayer . . . Para-duḥkha-duḥkhī. He is always unhappy seeing these fallen conditioned souls unhappy. Other . . . Vaiṣṇava personally, he has no unhappiness. Naivodvije para duratyaya-vaitaraṇyāḥ (SB 7.9.43). That will be explained. Tvad-vīrya-gāyana-mahāmṛta-magna-cittaḥ, śoce tato vimukha-cetasa, indriyārtha-māya-sukhāya bharam udvahato vimūḍhān (SB 7.9.43). So Vaiṣṇava is always sorry for the rascals in the world. Otherwise, he has nothing to be unhappy. He can sit down anywhere; he can sleep anywhere; he can eat anything. He doesn't require anyone's help. He . . . As Kṛṣṇa is self-sufficient, similarly, Kṛṣṇa, not exactly like that, but a Vaiṣṇava is also self-sufficient, depending only on Kṛṣṇa. That is Vaiṣṇava. So he has nothing to lament or nothing to regret. He is always pleased in the service of the Lord, but he is always sorry for the conditioned souls who are suffering the material pangs on account of ignorance.