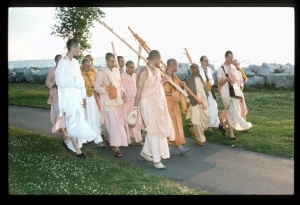 Prabhupāda: (break) . . .śakti, śaktimān. The Supreme Lord is śaktimān. Just like the sun and the sunshine and the sun-god, and practically they are one. From the sun-god there is. . . The abode of the sun-god is the sun globe, and the shining of the sun globe is also sunshine. So in one sense they are one; in other sense they are different. Just like the sunshine is reaching here, it does not mean the sun globe is reaching here. That is also explained in the Bhagavad-gītā, mayā tatam idaṁ sarvaṁ jagad avyakta-mūrtinā (BG 9.4): "I am spread." So sarvaṁ khalv idaṁ brahma, everything is Kṛṣṇa. But at the same time, if you commit mistake. . . The same way, "Because the sunshine is here, therefore sun is here," that is a mistake. This is viśiṣṭa-advaita.

They are all one, advaya-jnana, but still they're different. Advaita-viśiṣṭa. That is explained in the Śrīmad-Bhāgavatam, that brahmeti paramātmeti bhagavān iti śabdyate. Vadanti tat tattva-vidas tattvaṁ yaj jnanam advayam (SB 1.2.11). Advayam means advaya, advaita, no difference, the same thing. But viśiṣṭa—this is Brahman, this is Paramātmā—viśiṣṭa. Advaita but viśiṣṭa. A specific reference: Brahman, Paramātmā and Bhagavān, they are one. But still, you cannot say Brahman is Bhagavān. The same example: the sunshine and the sun globe, they are one. Unless there is appearance of the sun globe, sun planet, you cannot have sunshine. So in that sense, they are one, but still, if you take sunshine as the sun globe, that is not correct.

Prabhupāda: Yes. They're all one.

Prabhupāda: Yes. But still there is specific differences. That is called viśiṣṭa: one with specific difference. And the Māyāvādī philosophers, they say, "No, there is no specific difference. This is māyā." But we Vaiṣṇava, we don't say that. That sunshine is sunshine, sun globe is sun globe, and sun-god is sun-god. But taken together, they are all one. Diversity in unity. That is viśiṣṭa-advaitavāda. So actually, all the Vaiṣṇava ācāryas—Madhvācārya, Rāmānujācārya, Nimbārka and Viṣṇu Svāmī—there is no difference of opinion, but they have explained the Absolute Truth more vividly in their own angle of vision. Otherwise there is no difference. They never say that God and the living being are one. They will never say that. That is not Vaiṣṇava philosophy. That is Māyāvāda philosophy. So the propounder of Māyāvāda philosophy is Śaṅkarācārya, and other Vaiṣṇava ācāryas—Madhvācārya, Rāmānujācārya, Nimbārka, Viṣṇu Svāmī—practically they are all one opinion. There is no. . . They differ from Śaṅkarācārya.

And if we study philosophy intelligently, then we can understand that living being, jīva, how he can become one with the Supreme. Then why he has become jīva? Jīva is eternally. In the Bhagavad-gītā it is stated, mamaivāṁśo jīva-bhūtaḥ jīva-loka sanātana (BG 15.7). Sanātana. Sanātana means eternally. He is fragmental parts of the Supreme. Not that by māyā he is thinking fragmental parts but actually he is one. That is Māyāvāda philosophy. But Kṛṣṇa does not say that. Kṛṣṇa says sanātana. He is fragmental parts sanātana, eternally. Besides that, it is clearly explained in the Bhagavad-gītā that the spirit cannot be cut into pieces, acchedyo 'yam adāhyo 'yam (BG 2.24), so how it becomes a small fragment? Acchedyo 'yam: you cannot cut into pieces, spirit. And it is further explained that these fragmental parts eternally, from the very beginning.

Kṛṣṇa also says in the Bhagavad-gītā, "My dear Arjuna, you, Me and all these soldiers and kings who have assembled there, they existed like this in the past, they're existing in the same way, and they'll continue to exist like that." There is no question of becoming one. Past, present, future, always we are distinct. So how they can be one, sanātana? We are part and parcel sanātana, eternally. But in quality we are one. In quality we are one. Kṛṣṇa is eternal; we are eternal. Kṛṣṇa is spirit; we are spirit. Kṛṣṇa is also person; we are also person. In this way, we are one, but He is the great and we are servants. This is actual position. And if we claim that after being freed from māyā, we shall become one with the Supreme, that is called Māyāvāda. We eternally, we are separate. Dvaitavāda. That is Madhvācārya's philosophy, dvaitavāda. So if you consider very, I mean, cool-headed, then Vaiṣṇava philosophy is the best, not this Māyāvāda's philosophy.

Indian lady: No, He's not under karma.

Prabhupāda: Yes. We are. That is the difference.

Prabhupāda: That I am pointing out. That is the difference between Kṛṣṇa and ourself. We are bound up by the laws and regulation of karma. But Kṛṣṇa is not like that. Yes. That is the difference. Na māṁ karmāṇi limpanti na me karma-phale spṛhā (BG 4.14). He's not bound up by the karma. But we take sometimes, mistake, that Kṛṣṇa is like us. Avajānanti māṁ mūḍhā mānuṣīṁ tanum āśritam (BG 9.11). They are mūḍhas. They do not know it, what is Kṛṣṇa. They think Kṛṣṇa as a human being like us. That is mūḍha. Therefore they do not surrender to Kṛṣṇa. Na māṁ duṣkṛtino mudhāḥ prapadyante narādhamāḥ (BG 7.15). So they remain narādhama. They do not make any progress.

Prabhupāda: Who has interpreted?

Prabhupāda: Yes. That we accept also. We say māyā. But one can be free from māyā. Mām eva ye prapadyante māyām etāṁ taranti te. If you surrender to Kṛṣṇa, then one is not captivated by māyā. Māyā is there, just like police is there. If you are not a criminal, then police has nothing to do with you. Police may be there. But if you are a criminal, then police will arrest you. Similarly, māyā is acting as police force of Kṛṣṇa. So as soon as you become criminal, forget Kṛṣṇa as your master, then the police, māyā, will capture you. That is the business.

As soon as you try to become independent of Kṛṣṇa, immediately māyā captures. This is the beginning of māyā. And again when you surrender, mām eva ye prapadyante māyām etāṁ taranti te, no more māyā (BG 7.14).

So to become free from māyā is very easy provided one understands Kṛṣṇa. And as soon as he understands Kṛṣṇa, he understands his duty, that "My duty is to serve Kṛṣṇa." That is called bhakti. Immediately he becomes free from all the contamination of māyā. Sa gunān samatītyaitān brahma-bhūyāya kalpate (BG 14.26). Who? Māṁ ca yo 'vyabhicāreṇa bhakti-yogena sevate (BG 14.26). If you employ yourself immediately in loving service of Kṛṣṇa. . . Kṛṣṇa also says, māyām etāṁ taranti te. So all the devotees, they are not under māyā. They're already in liberated stage. Therefore a devotee does not want liberation because he's already liberated. Why he'll aspire about liberation? That is explained by Bilvamaṅgala Ṭhākura: muktiḥ mukulitāñjali sevate asmān (Kṛṣṇa-karṇāmṛta 107): "Mukti is standing before me with folded hand, 'What can I do for you?' " So why the devotees will aspire mukti? Mukti is ready to serve him as maidservant. This is the position of devotee. Muktiḥ mukulitāñjali sevate. This is the great authority, Bilvamaṅgala Ṭhākura. Yes?

Prabhupāda: There is no difference. There is no difference. Nārāyaṇa is Kṛṣṇa. Kṛṣṇa is Nārāyaṇa. And oṁ namo is addressing Him, "O Nārāyaṇa, please engage me in Your service." Hare Kṛṣṇa is also addressing Hare, Harā, the potency of Kṛṣṇa or the potency or energy of Kṛṣṇa, "O Kṛṣṇa, please engage me in Your service." This is Hare Kṛṣṇa. The same meaning. There is no difference. The real business is that Kṛṣṇa is asking to surrender. That is Kṛṣṇa's mission. And if we voluntarily surrender, then Kṛṣṇa becomes very pleased. So this is surrender: "O Kṛṣṇa, O energy of Kṛṣṇa, kindly engage me again in Your service." That's all. This is Hare Kṛṣṇa. Hare Kṛṣṇa means, "O Harā, O Kṛṣṇa." Because Kṛṣṇa is there, Kṛṣṇa's energy is there. Kṛṣṇa is not alone. Parāsya śaktir vividhaiva śrūyate (CC Madhya 13.65, purport). So Kṛṣṇa's one energy is this material energy, mama māyā. This māyā is also Kṛṣṇa's energy. It is not different from Kṛṣṇa. Śakti śaktimatayor abheda. There is no difference between fire and the heat. Heat is also fire. Similarly, Kṛṣṇa and Kṛṣṇa's energy, they're one, at the same time, different. This is called acintya-bhedābheda-tattva. Caitanya Mahāprabhu's. Simultaneously one and different.

So we are praying to Kṛṣṇa and Kṛṣṇa's energy. If we pray to Kṛṣṇa's energy, she is Kṛṣṇa's energy, she will understand, "Now, he is now correct." So she gives facilities. She gives facilities, "Yes, now you can serve Kṛṣṇa. I give you. . . I give you freedom. You are no more under my clutches." Māyām etāṁ taranti te. Immediately you surrender to Kṛṣṇa, you are immediately liberated. We haven't got to search out liberation separately. Immediately you surrender to Kṛṣṇa, immediately you are liberated—immediately, simultaneous. Mahātmānas tu māṁ pārtha daivīṁ prakṛtim āśritāḥ (BG 9.13). At that time māyā takes another feature. That is called yoga-māyā. The same māyā. . . Just like the same government laws acting in the prison house differently and acting in the university differently. But the potency is the same. If we take protection of the civil laws, then we are happy. And if we take protection of the criminal laws, then we are unhappy. That's all.

Haṁsadūta: (to Prabhupāda) I think prasādam is ready.

Prabhupāda: So any other question?

Prabhupāda: There is "I," Kṛṣṇa. There is "I," Kṛṣṇa. If you understand this demigod. . . Just like this finger. If you understand this finger belongs to Swāmījī, then you are correct. And if you think that this finger is separate power, that is incorrect. This finger is powerful so long attached to the body. And if you cut the finger from the body, it has no power. Similarly, the demigods, if you accept that they are different part and parcel of Kṛṣṇa—there must be relationship with Kṛṣṇa—then it is correct. Just like it is said, sūrya, sūrya upāsanā, that, or durgā upāsanā. These are different upāsanā—sūrya, or pañcopāsanā, durgā upāsanā, sūrya upāsanā, gaṇeśa upāsanā and viṣṇu upāsanā, pañcopāsanā. So how we can worship? Just like Durgā. Durgā is worshiped by the Vaiṣṇava in this way, sṛṣṭi-sthiti-pralaya-sādhana-śaktir ekā chāyeva ya. . . (Bs. 5.44). (break) (end).