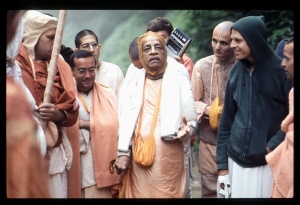 Translation: "Only the material body of the indestructible, immeasurable and eternal living entity is subject to destruction—therefore fight, O descendant of Bharata."

Prabhupāda: Antavanta ime dehā nityasyoktāḥ śarīriṇaḥ. Śarīriṇaḥ, This is plural number. Śarīriṇ. So śarīrin or śarīrī means the proprietor of the śarīra, or body. Śarīra means this body, and śarīrin, one who possesses the body. So plural number is śarīriṇaḥ. In a varieties of ways, Kṛṣṇa is convincing Arjuna that the soul is different from this body. So this body, antavat: it will be finished. However you may try, so scientifically, applying cosmetic and other things, you cannot save the body. That is not possible. Antavat. Anta means . . . antavat means . . . anta means end, and vat means possessing.

So "You have got your duty to fight, and you are lamenting that the body of your grandfather or teacher or kinsmen, they'll be destroyed and you will be unhappy. That's all right, you'll be unhappy, but even if you do not fight, their body will be finished today or tomorrow or say a few years after. So why should you go back from discharging your duty?" This is the point. "And so far the soul is concerned, of your grandfather, teacher and others, they are nitya, eternal." Already explained. Nityasya uktāḥ.

Now Kṛṣṇa here also says ukta. Ukta means "It is said." Not that dogmatically I am speaking, I am putting up some theory. No. It is said. It is already settled, it is already ascertained. And in the Vedic literature, by authorities it is so said. This is the way of presenting evidence. Even Kṛṣṇa, the Supreme Personality of Godhead, He does not theorize. He said: "It is said," authorized. Anāśino 'prameyasya. Anāśinaḥ. Nāśinaḥ means destructible, and anāśinaḥ means not destructible. Śarīriṇaḥ, the soul, anāśinaḥ, it will never be destroyed. And aprameyasya. Aprameyasya, immeasurable. It cannot be measured also. In the Vedic literature the measurement is described there, but you cannot measure it. Anything. So many things are described in the Vedic literature.

So we take it for granted. Our facility is, because we accept the Vedas as authority, therefore the knowledge is there, ready. If somebody asks me or you, "Can you say how many forms of living entities are there within the water?" it is very difficult. Even the biologists cannot say, although they are very expert. I cannot say. But our facilities, we can immediately say there are nine hundred thousand. Although I have never experimented, neither seen personally, but because it is explained in the Vedic literature, I can say you correctly.

Therefore in the Vedānta-sūtra it is said that you want to see or perceive directly anything . . . just like so many rascals come, they challenge, "Can you show me God?" So yes, we can show you God, provided you have got the eyes. God can be seen by different type of eyes, not these eyes. That is stated in the śāstra: ataḥ śrī-kṛṣṇa-nāmādi na bhaved grāhyam indriyaiḥ (CC Madhya 17.136). Indriya means these senses, these material senses. With these material senses, you cannot experience directly what is the form of the Lord, what is His quality, what does He do.

So we have to see through the authorized books the description which is beyond our perception. Acintyāḥ khalu ye bhāvā na tāṁs tarkeṇa yojayet (Mahābhārata, Bhīṣma-parva 5.22). Tarkeṇa, by argument, which is beyond your sense perception. So many things. Even we see daily so many planets, stars in the sky, but we have no information. They are going directly to see the moon planet, but hopelessly coming back. It is very doubtful to say so. And they have got dogmatic impression, "Except this planet, in other planets, so many, there is no life." These are not perfect understanding. So from śāstra-yoni, if you want to see through the śāstra . . .

Just like moon planet. We have got information from Śrīmad-Bhāgavatam that there, the people, they live for ten thousands of years. And what is that measurement of year? Our six months equal to their one day. Now such ten thousands of years, just imagine. It is called daiva-varṣa. Daiva-varṣa means year according to the demigods' calculation. Just like Brahmā's day, that is demigods' calculation. Sahasra-yuga-paryantam ahar yad brahmaṇo viduḥ (BG 8.17). We have got information from Bhagavad-gītā, Kṛṣṇa said that they calculate the years of the demigods.

Now you try to understand what is the age of Brahmā by calculating one day. Your sahasra-yuga . . . we have got four yugas: Satya, Tretā, Dvāpara, Kali—these are called four . . . this calculation is forty-three hundred thousands of years. That is the sum total of the four yugas. Eighteen, twelve, eight and four. How many it comes? Eighteen and twelve? Thirty. And then eight, thirty-eight; then four. This is rough calculation. Forty-two, forty-three. Sahasra-yuga-paryantam. So, so many years, sahasra-yuga-paryantam ahar yad. Ahar yad means day. Sahasra-yuga-paryantam ahar yad brahmaṇo viduḥ (BG 8.17). This is the one day of Brahmā. One day means morning to evening. Forty-three hundred thousands of years your calculation.

Therefore these things are to be understood through the śāstra. Otherwise, you have no knowledge. You cannot calculate. You cannot go to Brahmā . . . you cannot go even to the moon planet, and what to speak of Brahmaloka is the ultimate, the remotest part of this universe. So by your direct experience you cannot calculate, and neither you can go. They estimate, the modern aeronautics, they estimate that in order to go to the topmost planet will require forty thousands of years by going in the light year. Just like light year, we have got calculation.

So we cannot estimate by direct perception even in this material world, and what to speak of the spiritual world. Not possible. Panthās tu koṭi-śata-vatsara-sampragamyo vāyor athāpi manaso muni-puṅgavānām (Bs. 5.34). By mental . . . muni-puṅga means mental speculation. You can go on mental speculating, but if you do even for many hundreds and thousand of years, it is not possible to calculate. You have to accept this truth through the śāstra—otherwise, it is not possible. Therefore Kṛṣṇa said, nityasyoktāḥ śarīr-ukta. Ukta means "It is said." Not that, "I am presenting some dogma," although He can do so; He's Supreme Personality of Godhead. This is the method. Unless there is ukta, said by authorities, previous authorities, ācāryas, you cannot say anything. This is called paramparā. You try to understand with your intelligence, but you cannot make any addition or alteration. That is not possible. Therefore it is called nityasyoktāḥ. It is said; it is already settled. You cannot argue. Nityasyoktāḥ śarīriṇaḥ anāśino 'prameyasya, immeasurable.

Now, this soul, as in the previous verse we have understood, avināśi tu tad viddhi yena sarvam idaṁ tatam (BG 2.17). This is not measurement of the soul, but the power of the soul you can measure. But not the soul. It is not possible. Soul is so small that it is not possible. You have no measuring means, and because now our material senses, it is not possible. You can simply understand by consciousness. Just like when Caitanya Mahāprabhu fainted in the Jagannātha temple, Sarvabhauma Bhaṭṭācārya examined that there was no consciousness. Even the abdomen was not moving.

When you actually you have consciousness and you breathe, the abdomen moves. But Caitanya Mahāprabhu's abdomen was tested by Sarvabhauma Bhaṭṭācārya. It was also not moving. So he thought that, "This sannyāsī might have died." But he again tried. He brought a little cotton swab and put before His nostril, and when he saw the swab, the fibers little moving, then he became hopeful, yes.

So the soul is in the heart and Kṛṣṇa is also in the heart, because they remain both together. So place is also located. You can perceive also by consciousness where there is presentation of soul, but if you want to measure by experiment, that is not possible. Therefore it is called aprameya. Prameya means direct perception: I can see or I can touch, I can handle. So that is . . . Kṛṣṇa says no, it is not possible. Aprameya. Then, how I shall accept? Now Kṛṣṇa says. So how I can believe Kṛṣṇa? Kṛṣṇa says ukta, it is already settled up by authorities. Ukta. This is paramparā system. Kṛṣṇa also says ukta. Kṛṣṇa does not say that, "I speak." No. Ukta, "there is Vedic evidence." Where it is? In the Upaniṣads there is. Just like:

So we have to accept it. Kṛṣṇa confirms it, and actually also you cannot measure. But we get evidence, the present of the soul . . . presence of the soul. Still, how we can say there is no soul? No. This is foolishness. The whole world is going on under this foolishness. Not only now, before also. Like Cārvāka Muni, he was atheist—he did not believe. Lord Buddha also said like that, but he cheated. He knew everything because he is incarnation of God.

But he had to cheat the people in that way because they were not intelligent enough. Why not intelligent? Because they were killers of animals, they lost their intelligence. Keśava dhṛta-buddha-śarīra jaya jagadīśa hare (Śrī Daśāvatāra-stotra 9). Those who are animal killers, their brain is dull as stone. They cannot understand anything. Therefore meat-eating should be stopped. In order to revive the finer tissues of the brain to understand subtle things, one must give up meat-eating. Vinā paśughnāt (SB 10.1.4). It is the statement of the King . . . what is it?

Prabhupāda: Parīkṣit Mahārāja. He said that God consciousness, Kṛṣṇa consciousness, cannot be understood by the animal killer. Vinā paśughnāt (SB 10.1.4). Nivṛtta-tarṣair upagīyamānāt. You'll find those who are animal killers, the so-called Christians and Muhammadans, they cannot understand. They, simply fanatics. Cannot understand what is soul, what is God. They have got some theories, and they are thinking, "We are religionists." What is sin, what is pious activities, these things are not understood by them because they are animal killers. It is not possible.

Nindasi yajña-vidher ahaha śruti-jātam. He denied that, "I don't accept Vedas." Because in the Vedas there is sometimes recommendation, not for killing, but for giving rejuvenation to an animal. But killing, in that sense, is there for sacrifice. But Lord Buddha did not accept even animal killing in sacrifice. Therefore, nindasi. Nindasi means he was criticizing. Nindasi yajña-vidher ahaha śruti-jātaṁ sadaya-hṛdaya darśita. Why? He was so kind and compassionate. That is Kṛṣṇa consciousness. God is very kind, very compassionate. He does not like. But when there is necessity, He can kill. But His killing and our killing is different. He's all-good. Anyone killed by Kṛṣṇa, he immediately gets salvation. So these things are there.

So, immeasurable. You cannot measure what is the soul, but the soul is there, and the body is perishable. "If you . . . even if you do not fight, you save the bodies of your grandfather and teacher and others, as you are so much overwhelmed, so they are perishable." Antavanta means today or tomorrow. "Suppose your grandfather is already old. So you do not kill him just now or, say, after one year or six months, he may die because he's already old." These are the arguments put forward.

The main point is Kṛṣṇa wants Arjuna that he must fight. He must. He must not deviate from his duty as a kṣatriya. He should not be overwhelmed by the bodily destruction. Therefore He is giving instruction: "The body is different from the soul. So don't think that the soul will be killed. You stand up and fight." This is the instruction.