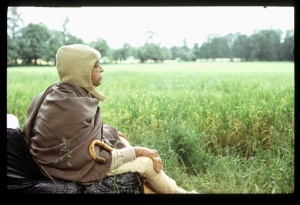 Prabhupāda: So prajāpati, the beginning there was only Lord Brahmā. The whole planetary system was to be populated. Therefore first of all Brahmā, then the seven ṛṣis, then the Kumāras, then Rudras. In this way . . . Manus. Then Manu's son, his son, his son. In this way the . . .

(aside) What is that sound?

The whole universe is populated. It is not the rascal Darwin's theory that, "There was no human being. It came out of a stone, the life." The first is the most intelligent person, Lord Brahmā.

Prabhupāda: Two hundred and twenty. In this way, in one year, there are so many Manus in Brahmā's . . . some five thousand Manus in one year. So, so many Manus, and his sons are coming. Manu . . . from Manu, the word man has come. Manuṣya. The man, this word, is from Manu. We are all sons of Manu. There are two descendants of Manu . . . no, two descendants, kṣatriya family, one from the sun god and one from the moon god.

Two families, kṣatriyas. Royal order. So Manu is from the sun, and the descendants, sūrya-vaṁśa, they are from Manu. Manur ikṣvākave 'bravīt. Manu, his son was Ikṣvāku, Mahārāja Ikṣvāku, king. He was the king of this planet, the original forefather of Lord Rāmacandra's dynasty. Mahārāja . . . Lord Rāmacandra appeared in the family of Manu. And similarly . . . Sūrya-vaṁśa. Similarly, Lord Kṛṣṇa also appeared in yadu-vaṁśa.

The bride's party and the bridesgroom party, they should narrate their seventh generation. If within their seventh generation it, what is called, collide, becomes the one man, then there will be no marriage, because it becomes the same family. One cannot marry in the same family. He must pick up another family. Otherwise, one could marry his own sister. No. That is not possible.

So these family descendants . . . still there is gotra. Gotra means in which family one is coming. Everyone must say his gotra and family title. Gotra means the guru, disciplic succession. Acyuta-gotra. We Vaiṣṇava, our gotra is acyuta-gotra, Kṛṣṇa. Kṛṣṇa's name is Acyuta. Because we give up our other family gotra. We accept.

"I am the origin, or seed-giving father." Trees, plants, aquatics, by their karma they have to accept different dress, but as spirit soul, everyone is part and parcel of Kṛṣṇa. That is also confirmed in the Bhagavad-gītā: mamaivāṁśo jīva-bhūtaḥ (BG 15.7).

Although they are associates, but Śrīvāsa, jīva-tattva; and Nityānanda Prabhu and Advaita Prabhu, viṣṇu-tattva. And Gadādhara is śakti-tattva. So in this way, God is person, and His personal expansions are innumerable, unlimited. The viṣṇu-tattva, They are worshipable. And other tattva, śakti-tattva and jīva-tattva, they are meant for service. But all together taken, that is one. That is Absolute Truth.

So there are many different philosophical views of the Absolute Truth, how He is one with the energies and the separated expansion. So here it is explained that kalāḥ sarve harer eva. Everyone is expansion from Kṛṣṇa, the Supreme Personality of Godhead. But those who are prominent, they are called prajāpatis. Prajāpatis means directly expanding. These Kumāras, they were also offered to become prajāpati, but they refused their father's request. So "We are not going to marry and beget children." So Brahmā was angry.

So when he was angry, then Lord Śiva, Rudra, from his eyes generated. In higher circle the generation can be produced from any part of the body. But we cannot understand. We simply know one part wherefrom the generation comes. No. In higher circle . . . just like many living entities came out from Brahmā's nostril, eyes, ear. Just like Lord Brahmā himself came out from the navel of Viṣṇu. This requires specific power. Not that we have got some stereotyped ideas.

Therefore we sometimes find difficulty to understand the description of the Vedas and the Purāṇas. They do not believe. As soon as we say that there was a lotus flower sprouted from the navel of Lord Viṣṇu, and on that lotus flower Brahmā generated, they call it a story. No. These are not stories. These are fact. But our philosophy is Dr. Frog's philosophy. You see?

I can simply understand that three feet water in the well. That's all. If there is beyond that, description of Atlantic Ocean, it is beyond my conception. I therefore refuse. This is going on. This is the so-called scientists, philosophers. They have got a teeny brain, which they cannot accommodate so many big things. Therefore they disbelieve. And therefore they are nāstika.

But every description in the Vedic literature, they are fact. That is called āstikyam, to have staunch faith. Our process is, therefore, whenever we speak something, we have to quote some Vedic version. Then it is corroborated. It is fact. Janmādy asya yataḥ (SB 1.1.1). Vedas, Vedānta, says the Absolute Truth is that which is the origin, source of everything.

There must be something, original source. Otherwise how things are coming? This conviction means faith. Kṛṣṇa says, sarva-dharmān parityajya mām ekaṁ śaraṇaṁ vraja. So those who will argue, "Why shall I surrender to Kṛṣṇa?" But one who will accept, he becomes benefited.

So Vedic knowledge should be accepted as it is. Don't try to comment. If you go on commenting with your teeny brain, then you will never be able to achieve the success. That is the process. Vedavān. I have given you several times this example, that in the Vedas it is said that cow dung is pure, although it is the stool of an animal.

We accept: "Yes, it is pure." And actually you'll find, yes, it is pure. If you analyze, you'll find all antiseptic properties. Now how in stool? Stool is septic. Septic tank, where has stool. But this stool is anti . . . it is practical. You can see. But wherefrom we get this information? From the Vedas.

The knowledge received from the Vedas, there is no mistake. There is no illusion. It is perfect. Just like here, we have read the passage that four lakhs of years, 400,000's of years after from this time, there will be incarnation of Kalki. His father's name should be Viṣṇu Yaśi.

The place where He will appear, it is Sambhal. Everything is stated there. Now 400,000's of years it will . . . Lord Buddha appeared 2,500 years after the Bhagavat was written. That's came a fact. So if we take the Vedic statement, Vedic literature statement, as fact, then our knowledge is perfect. You don't require to research. There is no need. It is perfect knowledge, and very easy.

He said . . . Arjuna said: "My dear Kṛṣṇa, You are my contemporary, of the same age. So how can I believe that You spoke Bhagavad-gītā some four hundred millions of years ago to sun god? How can I believe You?" So Kṛṣṇa answered, "Yes, you were also present, but you have forgotten. I remember."

That is the difference between God and human, living entity. God knows everything, past, present, future. We do not know. We are teeny. We cannot be equal with God at any stage of life. Even Arjuna, who is constant companion of Kṛṣṇa, he is also forgetting. That . . . Kṛṣṇa replied: "Both you and Me had many, many births. We appeared. But you have forgotten; I remember. That is the difference."

So the difference between God and ordinary living entity must be there. Anyone who is claiming as the Supreme Lord, or God, he is a blasphemer. He is a rascal. He's a cheater. So you should not be influenced by such rascals. God is always great. Always. There is no equal, no greater. That is called great. Nobody can be equal with God and nobody can be greater than God. Everyone under God. Asamordhva. Therefore God's another name is Asamordhva. "A" means none. Sama means equal. Ūrdhva means greater. Asamordhva.

So everyone is emanation from God, but nobody is equal with God. But the viṣṇu-tattva, They are the same. There is no difference between Kṛṣṇa and Rāmacandra, Nārāyaṇa, Viṣṇu, because They are viṣṇu-tattva. Baladeva. They are equally powerful. But jīva-tattva, we living entities, although we are part and parcel of God, we are not equally powerful. That is called the philosophy of acintya-bhedābheda-tattva, simultaneously one and different. Simultaneously one and different.

Just like in Bible also, Jesus Christ is claimed as one with God, but at the same time different. As son, he is different. As representative of God, he is one. That is the philosophy, perfect philosophy. All living entities, anything within this manifestation, even this whole world, is one with God. Idaṁ hi viśvaṁ bhagavān ivetaraḥ (SB 1.5.20), Nārada Muni said to Vyāsadeva. Idaṁ hi viśvam. This whole universe is God. Idaṁ hi viśvaṁ bhagavān, the Supreme Personality of Godhead, ivetaraḥ: but it appears like different.

So now, according to this formula, idaṁ hi viśvaṁ bhagavān . . . then forgetfulness of Bhagavān. Forgetfulness of relationship with Bhagavān, Kṛṣṇa, is materialism. The . . . actually, everything is Bhagavān, but when we forget the relationship of this world and Bhagavān, Kṛṣṇa, that is materialism. Just like we are offering some foodstuff to Kṛṣṇa. So Kṛṣṇa is eating matter? No. Kṛṣṇa cannot eat matter. He is spirit. Then how we are offering the same rice and ḍāl to Kṛṣṇa which is also being cooked in the hotel?

Just like this temple. This temple is spiritual, Vaikuṇṭha. It is not Los Angeles. Don't think like that. It is Vaikuṇṭha, because here every second the remembrance of Kṛṣṇa is there. Therefore it is not Los Angeles. Or anyone who remembers Kṛṣṇa always, twenty-four hours, he is living in Vaikuṇṭha. He is not in the kingdom of māyā. That is required. Satataṁ cintayanto mām (BG 9.14): "Always thinking of Me." In the Bhagavad-gītā you will find, satataṁ cintayanto mām.

So if you keep this practice, always thinking of Kṛṣṇa, then you are not in the material world; you are always in the spiritual world. For practical example, just like there are foreign embassies in foreign countries. So long they are within the embassy, they are not living in the foreign country. That is the law.

Suppose I belong to some foreign embassy. So I have done something criminal. So the American government cannot arrest me from the embassy. When I come out, he can arrest. So ships also, when they are on the port of a foreign country, so on the ship also the foreign police force cannot arrest anyone. These are the etiquette, law.

So if it is possible in ordinary dealings, so why not possible spiritually? And that's a fact. If you keep always yourself in Kṛṣṇa consciousness, you do not belong to this material world. Then actually you are part and parcel of Kṛṣṇa, your spiritual identity.