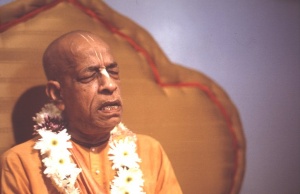 Prabhupāda: So this question should be put forward for superior masters in this way, not by challenge. One may question, but the humbleness is presented also that, "If you think that I am able to understand . . ." Sometimes we do not, I mean to say, possess the capacity to understand. For example, when I was meeting my spiritual master in the beginning, practically seventy-five percent or eighty-five percent of his version I could not understand, but still I was hearing. I was not able to understand, but still I wanted to hear. And for this reason only he accepted me as his disciple.

When . . . in this Allahabad, when I was being introduced by one of my Godbrother—he contributed the land . . . (indistinct) . . . he is dead and gone—so he introduced me, that . . . of course, he did not know that before this introduction I met Guru Mahārāja in 1922. So as soon as he was introducing, my Guru Mahārāja captured the word, and he said: "Yes, I have seen this boy, and he is very anxious to hear me, so I shall accept him." That was the only qualification, that although I did not understand what he was speaking, I tried to sit down and hear him.

So here is also is the same thing. The Yamadūta says that, "You can answer about our enquiries if you think it is beneficial to us, or if we are able to understand it." Iti devaḥ . . .

To memorize the lotus feet of the Supreme Personality of Godhead, it is the system that one should go through guru and Gaurāṅga. That is the prayer we offer daily: vande 'haṁ śrī-guroḥ śrī-yuta-pada-kamalaṁ śrī-gurūn vaiṣṇavāṁś ca śrī-rūpaṁ (CC Antya 3.1). They are all guru. First, spiritual master, his spiritual master, then up to Gosvāmīs. Śrī-rūpaṁ sāgrajātaṁ saha-gaṇa-raghunāthānvitaṁ taṁ sa-jīvam.

So smaran pādāmbujaṁ hareḥ. Yamarāja, although he is so exalted, great personality, the system is also there. Nobody should try to answer or speak without offering proper respects to Guru-Gaurāṅga and Kṛṣṇa. Smaran pādāmbujaṁ hareḥ. Prītaḥ sva-dūtān: and Yamarāja was very much pleased, because when the subordinates enquire from the superior master, he becomes very much pleased. Why he becomes pleased? Because he gets an opportunity to describe the holy activities and form and qualities of the Supreme Personality of Godhead. That is an opportunity.

You will find in the Śrīmad-Bhāgavatam when Nārada also enquires from Lord Brahmā about the system of religion, he also thanked Nārada that, "You have given me an opportunity to speak about the Lord's activities." Therefore the pastimes of the Lord, His name, His form, His qualities, His entourage, His abode—whenever one enquires, and whenever one speaks, both of them become blessed.

Now Yamarāja, the enquiry was, "Whether there are any other controller either equal to you or greater than you?" That was the enquiry. Now Yamarāja says:

Just like yesterday evening in that institution, Pedagogical Institution, one Indian boy from Maharastra, he says: "Swāmījī, to be frank, I have no faith in God." "And why you have no faith in God? Don't you believe there is a controller?" He hesitated. So I told him that "You are speaking . . . that you speaking that 'I do not believe in God' may be stopped immediately by some superior force. While speaking, you may die immediately. So are you not controlled?" He admitted, "Yes, I am controlled." "Then why don't you believe the controller is God?"

Just like Hiraṇyakaśipu, when Lord Nṛsiṁhadeva appeared before him as death personified, he could not challenge anymore. That is stated in the Bhagavad-gītā: mṛtyuḥ sarva-haraś cāham (BG 10.34). Mṛtyuḥ means death. When death takes place, then everything is taken away, everything finished—not only his material opulence, not only his position, but even his life is also taken away.

So for the atheist class of men, death is God, whilst the devotees, they see God in the lifetime in the ordinary dealings.

Sadaiva, always he is seeing God, Kṛṣṇa. The atheist class challenges that, "Whether you have seen God?" But they do not know how one can see God. God can be seen. So when God is seen in process of premāñjana, in loving devotional service, that is very pleasurable, that is blissful. And when God is seen as death, ah, that is very displeasure.

Therefore two processes are going on:

The atheists will see God when they are vanquished. That is there. And the devotees are seeing God always, santaḥ sadaiva hṛdayeṣu vilokayanti. So not that all these atheist . . . atheist generally means who do not believe in the scriptures describing about God; he is called atheist. In all scriptures of the world there is acceptance of God. Bible accepts God, Koran accepts God, our Vedic literature, Veda, Vedānta, they accept God. The Buddhists, they do not accept God; therefore it is atheist literature. Caitanya Mahāprabhu said any literature which is devoid of God consciousness, that is atheistic literature. So Yamarāja says that paro mad-anyo jagatas tasthuṣaś ca.

He immediately said: "Don't think that I am all-in-all." This is devotee. One may be very, very much exalted, but he should always think that "I am servant of God." That is mukti. Then māyā cannot touch you. And as soon as he thinks that he is all-in-all, that is māyā.

So Yamarāja, because he is mahājana . . . we recommend, mahājano yena gataḥ sa panthāḥ (CC Madhya 17.186). We have to follow the footsteps of mahājana. They are authorities. Here is authority. He is authority because immediately he accepts, "No, no, no! I am not the Supreme." Here is a third-class man and being kicked by maya; he challenges, "I am God. I am everything." This is the position of the people in general in this age.

Here Yamarāja, he is so powerful that he is controlling the whole criminal department of the Supreme Personality of Godhead. He is arresting all the sinful persons and giving them proper punishment. He is so powerful, but he does not think himself all-in-all, or God. And yet third-class man, a simple pain in the teeth will kill him in so many ways, and he is claiming to become God. Just see the point. Therefore he is a mahājana. Mahājano yena gataḥ sa panthāḥ. Dharmaṁ tu sākṣād bhagavat-praṇītaṁ (SB 6.3.19) . . . (indistinct) . . . these instructions of Yamarāja is very valuable. Just see how he is humble and submissive to his master. Such a powerful man. Everyone is threatened, Yamarāja. Everyone, if one understands that Yamarāja is coming, then in this world so many . . . (indistinct) . . . will be immediately fainted: "Death is coming." Yamarāja means death is coming. There are so many big men with the same . . . one of the svāmīs—very well advertised, I do not wish to name him—at the time of his death he regretted that, "I have taught so many foolish things." Even Śaṅkarācārya also lamented. So that lamentation comes to the atheist class of men who preaches against Lord. That lamentation comes.

So Yamarāja says that mad-anyatah jagatas tasthuṣaś ca para isvarah asi . . . (indistinct) . . . tat kiṅkara . . . (indistinct) . . . isvarah (Śrīdhara Svāmī's commentary) That is very nice comment. "The other controller besides me, He is so powerful that He can control the creation, maintenance and annihilation of this whole cosmic manifestation. He is so . . . so great in power. And so far you have the idea that I am the greatest, I am the greatest controller, so my controlling department is that not those who are moving. I am controlling only . . ."

So within this universe there is one only who is controlling—Yamarāja. And that also not for all. He is not controller for everyone, only for the moving. And amongst the moving, those who are acting as the sinful, their number are not as great. Just like criminals, if you go to the prison house you will find so many people. But what are the proportion? These criminals who are put in together are a very small proportion.

So just see how humbly he presents that, "I am also controller. My controlling capacity is here." And here there are such fools, if he has control over a dozen of disciples, he declares himself, "I am God." How much foolish they are, just try to understand. A dozens of fools controlled by a rascal, and he says that, "I am God. I have become God."

Here Yamarāja says that paro mad-anyo jagatas tasthuṣaś ca (SB 6.3.12): "The greater controller than me, He is so great that He is controlling the creation and maintenance and annihilation of this world, of this whole manifestation." Otaṁ protaṁ paṭavad yatra viśvam. Viśvam. Viśvam means the universe, the whole cluster of universes. Because we have no other information, beyond this universe what is there. That information no scientist can give you.

They cannot give even information even very completely of the moon planet. They cannot give full information of the sun planet. Their information only jecture, that's all—theorizing. Because we cannot live in so high temperature as the sun has, they say there is no living entities there. But factually that is not the fact. There are living entities. Sūryaloka. Loka means there are inhabitants. There is a predominating deity, Vivasvān. Kṛṣṇa says. How you can say there is no population in Sūryaloka? Kṛṣṇa said:

Kṛṣṇa, He was speaking to Arjuna. As it is possible for Him to speak to Arjuna, a living entity on this planet, similarly, He is able to speak to the sun god. But you cannot imagine if there are living entities. This is Kṛṣṇa. This is God.

So we have to take information but Arjuna was not talking; Arjuna simply enquired. He did not, I mean to say, challenge that, "Kṛṣṇa, You said You spoke this science of Bhagavad-gītā yoga to the sun god. How You can go to sun god? His planet is high. The temperature is so great. How You could go?" That much he knew, that there are population of a different kind. That is . . . any person who is God conscious, Kṛṣṇa conscious, he knows all these things.

Why he knows? That is also stated in the Vedas: yasmin vijñāte sarvam evaṁ vijñātaṁ bhavanti (Muṇḍaka Upaniṣad 1.3). Just like what to speak of Arjuna, even insignificant personalities as we are, who confidently believe that there are population in the sun god. But even the greatest scientist, he cannot do. Why is this? Then Vedic injunction: yasmin vijñāte sarvam idaṁ vijñātaṁ bhavati. If you simply understand Kṛṣṇa—you cannot understand Kṛṣṇa cent percent, if you understand Him very little—then you understand the whole creation, sarvam idaṁ vijñātaṁ, very easily.

To understand reincarnation, eh, to understand reincarnation one says: "Yes . . . (indistinct) . . ." Another says: "No, how it can be?" Therefore our process of understanding from the Vedic scripture is very nice. You don't have to take so much trouble from the scientists, nonsensical. Accept, you take when a mahājana, just like Yamarāja, said: "Yes, there is a greater controller than me." That's all. There is no question that, "How is a greater controller than you . . . existing than you?" . . . (indistinct) . . . zero, void, or impersonal. No. There is a controller, and as soon as you speak of controller, He must be a person. There cannot be imperson.