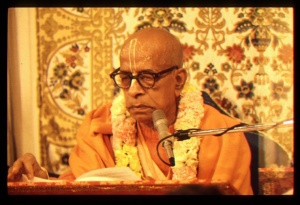 That original planet, Goloka Vṛndāvana, is described here in the Brahma-saṁhitā "just like a lotus flower."

Now, so far this material creation is concerned, it is said here that, "By His material potency, He manifests this material world and unlimited universes within the material world." Ah, nobody should think that the material world has come out of nothing, out of void. No. This is confirmed in all Vedic literature and especially in the Brahma-saṁhitā, and in the Bhagavad-gītā also it is stated, mayādhyakṣeṇa prakṛtiḥ sūyate sa-carācaram (BG 9.10).

So material nature is not independent. It is a misunderstanding, a wrong conception, that matter is working out of its own accord. Matter has no power to work. It is a jaḍa-rūpā. Jaḍa-rūpā means it has no moving capacity or, what is called, initiative. Matter has no initiative. Therefore matter cannot manifest in such a way without the direction of the Supreme Lord. Māyā-dvāre sṛje teṅho brahmāṇḍera gaṇa. Actually, it is His direction, but material potency is help only. That's all.

Jaḍa haite, from matter, there is no possibility of any creation. The Saṅkarṣaṇa, He is manifestation of Saṅkarṣaṇa, Balarāma. He is the director of this material creation.

"Just like it is, in contact with the fire, the iron becomes red hot and it become fire, similarly, in contact with Saṅkarṣaṇa, this material energy gets potency, and thereby the material manifestation is there."

In the Śrīmad-Bhāgavatam, in the Tenth Canto, it is stated that, "This Rāma and Kṛṣṇa"—Rāma means Balarāma, and Kṛṣṇa—"They are the root of this material creation. And both of Them enters into each and every universe and maintains that."

This is mentioned in Śrīmad-Bhāgavatam.

Now, puruṣa-rūpe, the first incarnation for this material creation, the Mahā-Viṣṇu, sa aikṣata. Simply by His glance, this material world begins its activity.

Ādau loka-sisṛkṣayā: "Just before the creation the Mahā-Viṣṇu, He takes His incarnation, and He puts His glance on the material energy, and the creation begins."

So ādyo avatāra, the first puruṣāvatāra, Mahā-Viṣṇu, is very vast. Just imagine how much great He is, His body is, that from His breathing all these universes are generating.

"That puruṣāvatāra, the first incarnation of puruṣa, He lies down in the water of Causal Ocean, and His name is Kāraṇodakaśāyī Viṣṇu."

So these things, of course theoretically we have to understand. But these are authentic explanation from scriptures, Vedic literatures. At least we have to accept them theoretically. The spiritual world means that there is no ignorance, there is no passion and there is no influence of time. Na yatra māyā kim utāpare: "And this māyā, this illusion, is also absent."

So there is no death, there is no birth, there is no ignorance, and everyone is obedient, everyone is happy. And their features of body is also exactly like God. In the spiritual planets, all of a sudden if you go, you cannot distinguish who is God and who is not. Yes. So . . . just like here also, when Kṛṣṇa comes, He appears just like one of us. So man is made after God. So, so far features are concerned, there is no difference between God and man. But the difference is only that God has no material body; we have got this material body subjected to the influence of time.

As the father impregnates the mother, similarly, this material nature is just like mother, and therefore material nature is worshiped as mother, goddess, mother goddess, Durgā, Kālī. Yes. And this worship of the country, nationalism, that is also the same matter-worship. Yasyātma-buddhiḥ kuṇape tri-dhātuke (SB 10.84.13).

In the Śrīmad-Bhāgavatam there is this evidence:

So there is another verse, that how the seeds are given within this material world.

"In this way, the Lord created unlimited number of universes." This one universe which you have seen—that is one only, but there are innumerable universes that is created.

"Now, the expansion of Kṛṣṇa who is doing all this material expansion, He is known as Mahā-Viṣṇu. Mahā-Viṣṇu."

Now here is a nice example. You have seen the sunshine entering your room through a hole of your window, and you will find so many atomic demonstration. So these brahmāṇḍas, the so many universes, they are emanating from the breathing of Mahā-Viṣṇu in that way.

In this way all the universes, they enter into the body of Mahā-Viṣṇu after the creation is over, and again comes out. In this way it is coming and going, coming . . . bhūtvā bhūtvā pralīyate (BG 8.19).

In the Bhagavad-gītā it is said that they are coming and going within. This is the way of material nature. And here is another evidence from Brahma-saṁhitā:

Now, such a vast, gigantic Mahā-Viṣṇu, of whose breathing producing this universes and whose inhaling, annihilating all the universes—such vast Mahā-Viṣṇu is only part and part of the expansion of Kṛṣṇa, Govinda. So Brahmā says, govindam ādi-puruṣaṁ tam ahaṁ bhajāmi. So just we have to imagine how much potential is the Lord Kṛṣṇa.