(Redirected from 1966 Journal - The Upper West Side) 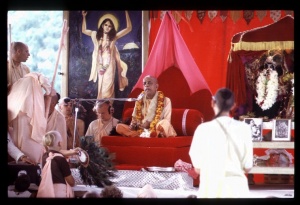 The Upper West Side Summary

On January 19, when the first entry occurs, Srila Prabhupada is living in the rear rooms of the yoga studio of Dr. Ramamurti Mishra at Suite 501, 100 West Seventy-second Street, on the Upper West Side of Manhattan. Daily Srila Prabhupada walks several blocks to Dr. Mishra's residential apartment at 33 Riverside Drive to bathe and to cook his meals. In the evenings Srila Prabhupada holds classes for interested persons. Some of Dr. Mishra's students attend these classes. During the day Srila Prabhupada is active in selling his books to book stores. He writes to newspapers and radio stations and organizes occasional speaking engagements. He also writes to large charitable foundations like the Alfred P. Sloan Foundation and the Rockefeller Foundation. On the weekends Srila Prabhupada joins Dr. Mishra on yoga retreats at the Ananda Ashram in Monroe, in upstate New York. Here he conducts kirtanas, which the students appreciate.

Srila Prabhupada is looking for a building to purchase as a Radha-Krsna temple. He hopes this will be financed by Sir Padampat Singhania, a wealthy industrialist in Kanpur, India. Srila Prabhupada contacts the Salvation Army to arrange the transfer of funds from India to America. He also writes to his Godbrothers in India to petition the President of India to sanction the foreign exchange. This endeavor occupies Srila Prabhupada for almost five months.

On February 2 Srila Prabhupada purchases a tape recorder to record classes, kirtanas and bhajanas. He pays the equivalent of one month's rent. On February 20 he completes tape recording the Gitopanisad introduction. Years later this becomes the introduction to the Bhagavad-gita As It Is. Srila Prabhupada tries to enlist the aid of Charlotte Leblanc, who has been attending his classes, to edit his manuscript of the Bhagavad-gita. She becomes reluctant when she learns that Srila Prabhupada's philosophy is opposed to monism.

Srila Prabhupada wants his own place, and on February 9 he signs a lease with the manager of the same building to rent an office room.

On February 23 Srila Prabhupada forms The International Institution for God Consciousness and enrolls seven of the people who are attending his classes. One of these is Harvey Cohen, who introduces Srila Prabhupada to Paul Murray, another young man seeking spiritual knowledge.

In March Srila Prabhupada's room is burgled. His tape recorder, typewriter and book bag are stolen. Within days Srila Prabhupada moves to a loft at 94 Bowery, which he shares with Paul Murray. While he is obligated to give a month's notice at his present location, he changes the venue of his classes on April 1 and travels downtown for each meeting.

1. From Teertha Maharaj
2. From the Nepal Permanent Commission
3. From Brindaban.
4. From United States Navigation Co.

Went to Ananda Ashram Monroe
The Plumber did not turn up.
No expenses. 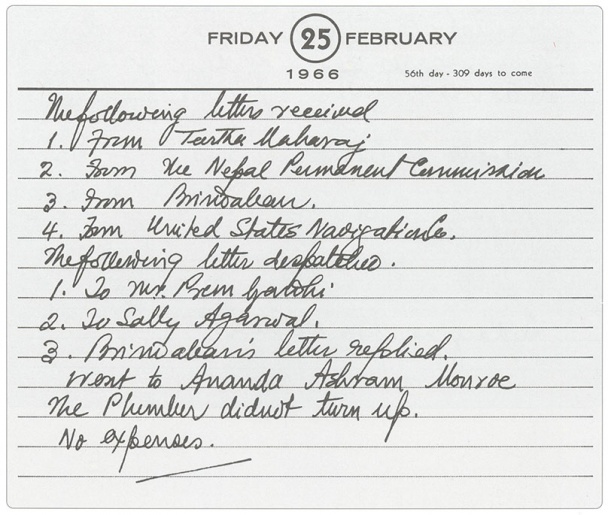