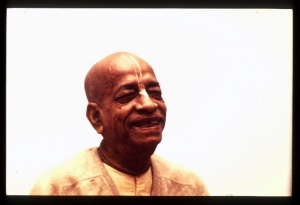 Śrīla Śukadeva Gosvāmī continued: My dear King, after hearing Citraketu's statement, Lord Śiva, the most powerful personality, whose knowledge is fathomless, simply smiled and remained silent, and all the members of the assembly followed the lord by not saying anything.

Citraketu's purpose in criticizing Lord Śiva is somewhat mysterious and cannot be understood by a common man. Śrīla Viśvanātha Cakravartī Ṭhākura, however, has made the following observations. Lord Śiva, being the most exalted Vaiṣṇava and one of the most powerful demigods, is able to do anything he desires. Although he was externally exhibiting the behavior of a common man and not following etiquette, such actions cannot diminish his exalted position. The difficulty is that a common man, seeing Lord Śiva's behavior, might follow his example. As stated in Bhagavad-gītā (BG 3.21):

"Whatever action a great man performs, common men follow. And whatever standards he sets by exemplary acts, all the world pursues." A common man might also criticize Lord Śiva, like Dakṣa, who suffered the consequences for his criticism. King Citraketu desired that Lord Śiva cease this external behavior so that others might be saved from criticizing him and thus becoming offenders. If one thinks that Viṣṇu, the Supreme Personality of Godhead, is the only perfect personality whereas the demigods, even such demigods as Lord Śiva, are inclined to improper social affairs, he is an offender. Considering all this, King Citraketu was somewhat harsh in his behavior with Lord Śiva.

Lord Śiva, who is always deep in knowledge, could understand Citraketu's purpose, and therefore he was not at all angry; rather, he simply smiled and remained silent. The members of the assembly surrounding Lord Śiva could also understand Citraketu's purpose. Consequently, following the behavior of Lord Śiva, they did not protest; instead, following their master, they remained silent. If the members of the assembly thought that Citraketu had blasphemed Lord Śiva, they would certainly have left at once, blocking their ears with their hands.