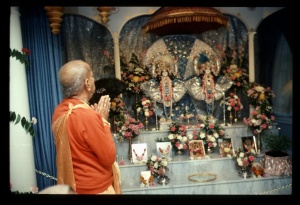 Those who are on this path are resolute in purpose, and their aim is one. O beloved child of the Kurus, the intelligence of those who are irresolute is many-branched.

A strong faith that by Kṛṣṇa consciousness one will be elevated to the highest perfection of life is called vyavasāyātmikā intelligence. The Caitanya-caritāmṛta (CC Madhya 22.62) states:

The whole process, however, depends on perfect knowledge of the soul beyond the conception of the body—not theoretically but practically, when there is no longer a chance for sense gratification manifested in fruitive activities. One who is not firmly fixed in mind is diverted by various types of fruitive acts.