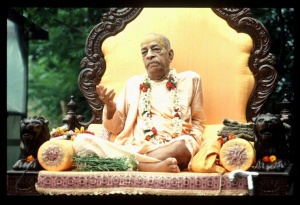 In this endeavor there is no loss or diminution, and a little advancement on this path can protect one from the most dangerous type of fear.

"If someone gives up his occupational duties and works in Kṛṣṇa consciousness and then falls down on account of not completing his work, what loss is there on his part? And what can one gain if one performs his material activities perfectly?" Or, as the Christians say, "What profiteth a man if he gain the whole world yet suffers the loss of his eternal soul?"

Material activities and their results end with the body. But work in Kṛṣṇa consciousness carries a person again to Kṛṣṇa consciousness, even after the loss of the body. At least one is sure to have a chance in the next life of being born again as a human being, either in the family of a great cultured brāhmaṇa or in a rich aristocratic family that will give one a further chance for elevation. That is the unique quality of work done in Kṛṣṇa consciousness.