Teachings of Lord Caitanya (1975), The Transcendental Pastimes of Rādhā and Kṛṣṇa 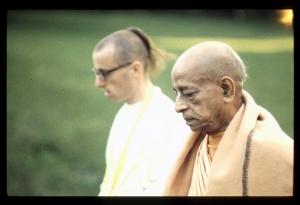 In the spiritual world, there is another energy, the superior spiritual energy, or internal energy, which acts under the direction of yogamāyā. Yogamāyā is the internal potency of the Supreme Lord; she also works under the Lord's direction, but she works in the spiritual world. When the living entity puts himself under the direction of yogamāyā instead of mahāmāyā, he gradually becomes a devotee of Kṛṣṇa. Yet those who are after material opulence and material happiness place themselves under the care of the material energy, mahāmāyā, or under the care of material demigods like Lord Śiva and others. In Śrīmad-Bhāgavatam it is found that when the gopīs of Vṛndāvana desired Kṛṣṇa as their husband, they prayed to the spiritual energy, yogamāyā, for the fulfillment of their desire. In the Sapta-śatī it is found that King Suratha and a merchant named Samādhi worshiped mahāmāyā for material opulence. Thus one should not mistakenly equalize yogamāyā and mahāmāyā.

Even the transcendental relationship experienced by a devotee of Nārāyaṇa in Vaikuṇṭha is incomplete in that it is not realization of a relationship with Kṛṣṇa in Goloka Vṛndāvana. The devotees of Kṛṣṇa do not relish devotional service to Nārāyaṇa because devotional service to Kṛṣṇa is so attractive that Kṛṣṇa's devotees do not desire to worship any other form. Thus the gopīs of Vṛndāvana do not like to see Kṛṣṇa as the husband of Rukmiṇī, nor do they address Him as Rukmiṇīramaṇa. In Vṛndāvana Kṛṣṇa is addressed as Rādhākrṣṇa, or Kṛṣṇa, the property of Rādhārāṇī. Although the husband of Rukmiṇī and Rādhā's Kṛṣṇa are on the same level in the ordinary sense, still, in the spiritual world, the names indicate different understandings of various aspects of Kṛṣṇa's transcendental personality. If one equalizes Rukmiṇīramaṇa, Rādhāramaṇa, Nārāyaṇa or any other name of the Supreme Lord, he commits the fault of overlapping tastes, which is technically called rasābhāsa. Those who are expert devotees do not accept such amalgamations which are against the conclusions of pure devotional service.

Although Śrī Kṛṣṇa, the Supreme Personality of Godhead, embodies all superexcellence and beauty, when He is amongst the damsels of Vraja, He is known as Gopījanavallabha. The devotees cannot relish the beauty of the Supreme Lord more than the damsels of Vraja. In Śrīmad-Bhāgavatam (SB 10.33.7) it is confirmed that although Kṛṣṇa, the son of Devakī, is the last word in superexcellence and beauty, when He is amongst the gopīs it appears that He is a sublime jewel set amongst divine golden craftsmanship. Although Lord Caitanya accepted this as the highest realization of the Supreme Lord as conjugal lover, He nonetheless requested Rāmānanda Rāya to proceed further.

Lord Caitanya exhibited the mode of Śrīmatī Rādhārāṇī when She was contacted from Dvārakā by Śrī Kṛṣṇa. Such transcendental love is not possible for any common man; therefore one should not imitate the highest perfectional stage exhibited by Caitanya Mahāprabhu. If, however, one desires to be in that association, he may follow in the footsteps of the gopīs. In the Padma Purāṇa it is stated that just as Rādhārāṇī is dear to Kṛṣṇa, similarly the kuṇḍa known as Rādhākuṇḍa is also very dear to Him. Rādhārāṇī is the only gopī who is dearer to Kṛṣṇa than all the other gopīs. In Śrīmad-Bhāgavatam (SB 10.30.28) it is also stated that Rādhārāṇī and the gopīs render the highest perfectional loving service to the Lord and that the Lord is so pleased with them that He does not wish to leave the company of Śrīmatī Rādhārāṇī.

When Lord Caitanya heard Rāmānanda Rāya speak of the loving affairs between Kṛṣṇa and Rādhārāṇī, He said, "Please go further. Go on and on." The Lord also said that He was enjoying with great relish the descriptions of the loving affairs between Kṛṣṇa and the gopīs. "It is as if a river of nectar is flowing from your lips," He said. Rāmānanda Rāya continued to point out that when Kṛṣṇa danced amongst the gopīs He thought, "I am not giving any special attention to Rādhārāṇī." Because amongst the other gopīs Rādhārāṇī was not so much an object of special love, Kṛṣṇa stole Her away from the area of the rāsa dance and showed Her special favor. After explaining this to Lord Caitanya, Rāmānanda Rāya said, "Now let us relish the transcendental loving affairs between Kṛṣṇa and Rādhā. These have no comparison in this material world."

Rāmānanda Rāya thus continued his descriptions. During one performance of the rāsa dance, Rādhārāṇī suddenly left the area, as if She were angry that no special attention was being shown Her. Kṛṣṇa was desirous of seeing Rādhārāṇī in order to fulfill the purpose of the rāsa dance, but not seeing Rādhārāṇī there, He became very sorrowful and went to search Her out. In Gīta-govinda there is a verse which states that the enemy of Kaṁsa, Kṛṣṇa, also wanted to be entangled in love affairs with women and thus simply took Rādhārāṇī away and left the company of the other damsels of Vraja. Kṛṣṇa was very much afflicted by Rādhārāṇī's absence and, being thus mentally distressed, began to search Her out along the banks of the Yamunā. Failing to find Her, He entered the bushes of Vṛndāvana and began to lament. Rāmānanda Rāya pointed out that when one discusses the purport of these two special verses of Gīta-govinda (3.1-2), he can relish the highest nectar of Kṛṣṇa's and Rādhā's loving affairs. Although there were many gopīs to dance with Kṛṣṇa, Kṛṣṇa especially wanted to dance with Rādhārāṇī. In the rāsa dance Kṛṣṇa expanded Himself and placed Himself between every two gopīs, but He was especially present with Rādhārāṇī. However, Rādhārāṇī was not pleased with Kṛṣṇa's behavior. As described in Ujjvala-nīlamaṇi: "The path of loving affairs is just like the movement of a snake. Amongst young lovers, there are two kinds of mentality—causeless and causal." Thus when Rādhārāṇī left the area of the rāsa dance out of anger at not receiving special treatment, Kṛṣṇa became very sorrowful to see Her absent. The perfection of the rāsa dance was considered to be complete due to Rādhārāṇī's presence, and in Her absence Kṛṣṇa considered the dance to be disrupted. Therefore He left the arena to search Her out. When He could not find Rādhārāṇī after wandering in several places, He became very distressed. Thus it is understood that Kṛṣṇa could not enjoy His pleasure potency even in the midst of all the gopīs. But in the presence of Rādhārāṇī He was satisfied.

"I am a Māyāvādī sannyāsī," Lord Caitanya protested. "I have no knowledge of the transcendental features of devotional service. By the greatness of Sārvabhauma Bhaṭṭācārya My mind has become clear, and I am now trying to understand the nature of devotional service to Lord Kṛṣṇa. Bhaṭṭācārya recommended that I see you in order to understand Kṛṣṇa. Indeed, he said that Rāmānanda Rāya is the only person who knows something about love of Kṛṣṇa. Therefore I have come to you upon the recommendation of Sārvabhauma Bhaṭṭācārya. Please, then, do not hesitate to relate to Me all the confidential affairs between Rādhā and Kṛṣṇa."

In this way Lord Caitanya actually took the subordinate position before Rāmānanda Rāya. This has very great significance. If one is serious about understanding the transcendental nature of Kṛṣṇa, he should approach a person who is actually enriched with Kṛṣṇa consciousness. One should not be proud of his material birth, material opulence, material education and beauty and with these things try to conquer the mind of an advanced student of Kṛṣṇa consciousness. One who thus goes to a Kṛṣṇa conscious person, thinking that he would be favorably induced, is deluded about this science. One should approach a Kṛṣṇa conscious person with all humility and put relevant questions to him. If one goes to challenge him, such a highly elevated Kṛṣṇa conscious person would not be available for any service. A challenging puffed-up person cannot gain anything from a Kṛṣṇa conscious man; he would simply remain in material consciousness. Although Lord Caitanya was born in a high brāhmaṇa family and was situated in the highest perfectional stage of sannyāsa, He nonetheless showed by His behavior that even an elevated person would not hesitate to take lessons from Rāmānanda Rāya, although Rāmānanda appeared as a householder situated in a social status beneath that of a brāhmaṇa.

Thus Lord Caitanya clearly showed that a sincere student never cares whether his spiritual master is born in a high brāhmaṇa family or kṣatriya family, or whether he is a sannyāsī, brahmacārī or whatever. Whoever can teach one about the science of Kṛṣṇa is to be accepted as guru.