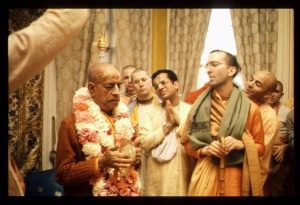 Following in the footsteps of Kavirāja Kṛṣṇadāsa Gosvāmī, we offer our respectful obeisances unto the lotus feet of Lord Caitanya.

Lord Caitanya is described as follows: He is the only shelter for the forlorn, the most fallen, and He is the only hope for those who are completely devoid of spiritual knowledge. Let us try to discuss His great contribution of devotional service.

The supremely powerful Lord Kṛṣṇa becomes manifest in five different features. Although He is one without a second, in order to serve five specific spiritual purposes, He becomes manifest in five ways. Such diversity is eternal and blissful, in contrast to the conception of monotonous oneness. From the Vedic literature we can understand that the Absolute Truth, the Supreme Personality of Godhead, eternally exists with His diverse energies. Lord Caitanya appeared with full diverse energies, and they are five in number; therefore Lord Caitanya is said to be Kṛṣṇa with diverse energies.

There is no difference between the energy and the energetic in regard to the Lord’s appearance as Śrī Caitanya Mahāprabhu and His four associates Nityānanda Prabhu, Advaita Prabhu, Gadādhara Paṇḍita and Śrīvāsa Ṭhākura. Among these five diverse manifestations of the Supreme Lord (as the Lord Himself and His expansion, incarnation, devotional energy and devotee) there is no spiritual difference. They are five in one Absolute Truth. For the sake of relishing transcendental flavors in the Absolute Truth, there are five diverse manifestations. These are called the form of a devotee, the identity of a devotee, the incarnation of a devotee, the devotional energy and the pure devotee.

Out of the five diversities in the Absolute Truth, the form of Lord Caitanya is that of the original Personality of Godhead, Kṛṣṇa. Lord Nityānanda is the manifestation of the first expansion of the Supreme Lord. Similarly, Advaita Prabhu is an incarnation of the Supreme Lord. These three—Caitanya, Nityānanda and Advaita—belong to the category of viṣṇu-tattva, or the Supreme Absolute Truth. Śrīvāsa represents the pure devotee, and Gadādhara represents the internal energy of the Lord for the advancement of pure devotion. Therefore Gadādhara and Śrīvāsa, although on the Viṣṇu platform, are dependent, diverse energies of the Supreme Lord. In other words, they are not different from the energetic, but they are manifest diversely for the sake of relishing transcendental relationships. The whole process of devotional service involves a transcendental reciprocation of the flavors of relationship between the worshiper and the worshiped. Without such a diverse exchange of transcendental flavors, devotional service has no meaning.

In the Bhagavad-gītā Kṛṣṇa’s last instruction is that everyone should give up all other engagements and render devotional service unto Him. But after Kṛṣṇa’s disappearance, less intelligent people misunderstood Him. They became contaminated with the Māyāvāda philosophy, which produced so many mental speculators that people forgot the actual position of the Absolute Truth and the living entity. Therefore Lord Śrī Kṛṣṇa Himself, as Lord Caitanya, again appeared in order to teach the fallen souls of this material world the way to approach Lord Kṛṣṇa. The Bhagavad-gītā teaches that one should give up everything and be done with this world of material attachment. A pure devotee of Lord Kṛṣṇa and one who follows the philosophy of Lord Caitanya are one and the same. Caitanya’s philosophy is that one should give up everything and worship God, Kṛṣṇa. Kṛṣṇa, as the Supreme Lord, the Personality of Godhead, spoke the same words, indicating Himself as the Supreme Lord. But the Māyāvādī philosophers misunderstood Him. Therefore Lord Caitanya, to clarify the situation, reiterated Lord Kṛṣṇa’s message: One should not declare himself to be as good as Kṛṣṇa but should worship Kṛṣṇa as the Supreme Lord.

We make a great mistake if we think Lord Caitanya is a conditioned soul. He is to be understood as the Supreme Absolute Truth, the Personality of Godhead, Śrī Kṛṣṇa Himself. In the Caitanya-caritāmṛta it is therefore said of Lord Caitanya: “Kṛṣṇa is now present in His five diverse manifestations.” Unless one is situated in uncontaminated goodness, it is very difficult to understand Lord Caitanya as the Supreme Personality of Godhead Himself. Thus in order to understand Lord Caitanya, one has to follow the direct disciples of Lord Caitanya—the Six Gosvāmīs—and especially the path chalked out by Śrīla Jīva Gosvāmī.

There is a very nice song sung by Śrī Narottama Dāsa Ṭhākura, a great devotee and ācārya in the disciplic succession from Lord Caitanya. Narottama Dāsa sings: “When will there be transcendental eruptions all over my body simply by my hearing the name of Gaurāṅga? When will tears incessantly flow from my eyes simply by my uttering the names of the Lord? When will Lord Nityānanda have mercy upon me and make all my desires for material enjoyment insignificant? When shall I be purified by giving up all contaminations of material enjoyment? And when shall I be able to see the transcendental abode, Vṛndāvana? When shall I be eager to accept the Six Gosvāmīs as my prime guides? And when will I be able to understand the conjugal love of Kṛṣṇa?” No one should be eager to understand the conjugal love of Kṛṣṇa without undergoing disciplinary training under the Six Gosvāmīs of Vṛndāvana.

The saṅkīrtana movement inaugurated by Lord Caitanya is a transcendental pastime of the Lord. “By it I live simultaneously to preach and popularize this movement in the material world.” In that saṅkīrtana movement of Lord Caitanya, Nityānanda and Advaita are His expansions and Gadādhara and Śrīvāsa are His internal and marginal potencies, respectively. The living entities are also called marginal potency because they have either of two attitudes—namely, the tendency to surrender unto Kṛṣṇa and the tendency to become independent of Him and try for material enjoyment. Due to this propensity for material enjoyment, the living entity becomes contaminated by the material world. When a living entity is dominated by a desire for material enjoyment and becomes entangled in material life, he is subjected to the threefold miseries of material existence.

There is a nice example showing how Lord Caitanya’s saṅkīrtana movement can save one from the miseries of material existence. The desire for material enjoyment is just like a seed sown in the earth. If a seed is inundated by too much water, there is no possibility of its fructifying. Similarly, if a conditioned soul is captivated by material enjoyment because the seed of such enjoyment is within his heart, he can be overwhelmed and overpowered by a flood of transcendental activities performed in love of God. In this way his seed of material enjoyment cannot fructify into a conditioned life of material existence. The conditioned living entities in the present Age of Kali are being overpowered by the flood of love of God inaugurated by Lord Caitanya and His associates.

In this connection there is a verse written by His Holiness Prabodhānanda Sarasvatī in his book Śrī Caitanya-candrāmṛta. This verse states that materialistic persons are very enthusiastic to maintain their family members, wife and children, and that there are also many mystic speculators who are engaged in speculating about liberation from the miseries of material life and who therefore undergo various austerities and penances. But those who have discovered the greatest transcendental flavor in the movement of Lord Caitanya Mahāprabhu no longer have a taste for such activities.

Those who are under the impression that there is material contamination in the form of the Supreme Personality of Godhead and in His devotional service are called Māyāvādīs. According to their imperfect speculation, the impersonal Brahman is the only existence in the cosmic manifestation. As soon as the Supreme Personality of Godhead is introduced, they consider that His personality arises from māyā, or the external material energy. Such persons consider all incarnations of the Supreme Lord to be contaminated by this material nature. According to them, the material body and the activities of matter are all that give a living being an individual identity. According to them, liberation means the end of an individual identity for the pure living being. In other words, the Māyāvādīs maintain that when a living entity is liberated he becomes one with the supreme, impersonal Brahman. According to such Māyāvāda philosophy, the Personality of Godhead, His abode, His devotional service and His emotional devotees are all under the spell of māyā and are consequently subjected to the material condition. Those who forget the transcendental nature of the Supreme Lord, His abode, His devotional service and His devotees consider all these to be but manifestations of material activity. One who thinks that there is a possibility of arguing about transcendence is called an agnostic, and one who thinks that there is a possibility of criticizing transcendence is called an atheist. Lord Caitanya wanted to accept all kinds of agnostics, atheists, skeptics and unfaithfuls and swallow them in the flood of love of God. Therefore He accepted the renounced order of life to attract all these forces.

Lord Caitanya remained a householder until His twenty-fourth year, and in the twenty-fifth year of His life He accepted the renounced order. After accepting the renounced order (sannyāsa), He attracted many other sannyāsīs. When He had been spreading the saṅkīrtana movement as a family man, many Māyāvādī sannyāsīs did not take His movement very seriously, but after the Lord accepted the sannyāsa order of life, He delivered not only Māyāvādī sannyāsīs but speculative students, atheists and those who were attached to fruitive activities and unnecessary criticism. The Lord was so kind that He accepted all these people and delivered to them the most important factor in life: love of God.

To fulfill His mission of bestowing love of God upon the conditioned souls, Lord Caitanya devised many methods to attract those who were uninterested in love of God. After He accepted the renounced order, all the agnostics, critics, atheists and mental speculators became His students and followers. Even many who were not Hindus and who did not follow the Vedic principles accepted Lord Caitanya as the supreme teacher. The only persons who avoided the mercy of Śrī Caitanya Mahāprabhu were those sannyāsīs who were known as the Māyāvādī philosophers of Benares. Their plight is described by Śrīla Bhaktisiddhānta Sarasvatī Gosvāmī: “The Māyāvādī philosophers of Benares were less intelligent because they wanted to measure everything by direct perception. On this basis they calculated that whatever is perceived by material means is māyā, or illusion. Since māyā is full of variegatedness and the Absolute Truth is transcendental to māyā, they concluded that there is no variegatedness in the Absolute Truth.”

The impersonalists speculate on the Supreme Personality of Godhead and His devotees and subject them to the tests of direct perception. But the Lord, His devotees and His devotional service are not subject to direct perception. In other words, spiritual variegatedness is unknown to the Māyāvādī philosophy; therefore all the Māyāvādī philosophers and sannyāsīs criticized Lord Caitanya when He was conducting His saṅkīrtana movement. They were surprised to see Lord Caitanya chanting and dancing after He accepted His sannyāsa order from Keśava Bhāratī, for Keśava Bhāratī belonged to the Māyāvādī school. Since Lord Caitanya therefore also belonged to the Māyāvādī sect of sannyāsīs, the Māyāvādīs were surprised to see Him engaged in chanting and dancing instead of hearing or reading the Vedānta-sūtras, as is the custom. The Māyāvādī philosophers are very fond of the Vedānta, and they misinterpret it in their own way. Misunderstanding their own position, they criticized Lord Caitanya as an unauthorized sannyāsī, arguing that because He was a sentimentalist He was not actually a bona fide sannyāsī.

All these criticisms were carried to Lord Caitanya when He was at Benares, and He was not at all surprised at them. He even smiled when the news was carried to Him. He did not associate with the Māyāvādī sannyāsīs but remained alone and executed His own mission. After staying for some days in Benares, He started for Mathurā.