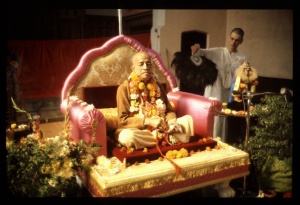 Thereafter, in the sixth year, after wandering in the forest, Rohita returned to the capital of his father. He purchased from Ajīgarta his second son, named Śunaḥśepha. Then he offered Śunaḥśepha to his father, Hariścandra, to be used as the sacrificial animal and offered Hariścandra his respectful obeisances.

It appears that in those days a man could be purchased for any purpose. Hariścandra was in need of a person to sacrifice as the animal in a yajña and thus fulfill his promise to Varuṇa, and a man was purchased from another man for this purpose. Millions of years ago, animal sacrifice and slave trade both existed. Indeed, they have existed since time immemorial.