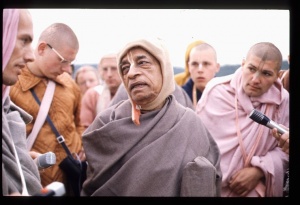 It is said that a jewel is very valuable, but when it is on the hood of a serpent, it is dangerous despite its value. Similarly, when a materialistic nondevotee achieves great success in learning and austerity, that success is dangerous for all of society. So-called learned scientists, for example, invented atomic weapons that are dangerous for all humanity. It is therefore said, maṇinā bhūṣitaḥ sarpaḥ kim asau na bhayaṅkaraḥ. A serpent with a jewel on its hood is as dangerous as a serpent without such a jewel. Durvāsā Muni was a very learned brāhmaṇa equipped with mystic power, but because he was not a gentleman, he did not know how to use his power. He was therefore extremely dangerous. The Supreme Personality of Godhead is never inclined toward a dangerous person who uses his mystic power for some personal design. By the laws of nature, therefore, such misuse of power is ultimately dangerous not for society but for the person who misuses it.