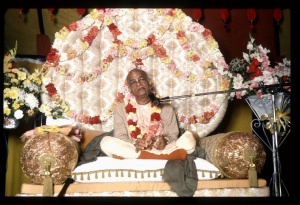 Lord Mahādeva said: O chief demigod among the demigods, O all-pervading Lord, master of the universe, by Your energy You are transformed into the creation. You are the root and efficient cause of everything. You are not material. Indeed, You are the Supersoul or supreme living force of everything. Therefore, You are Parameśvara, the supreme controller of all controllers.