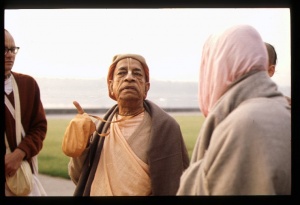 If a brāhmaṇa has all twelve of the brahminical qualifications [as they are stated in the book called Sanat-sujāta] but is not a devotee and is averse to the lotus feet of the Lord, he is certainly lower than a devotee who is a dog-eater but who has dedicated everything—mind, words, activities, wealth and life—to the Supreme Lord. Such a devotee is better than such a brāhmaṇa because the devotee can purify his whole family, whereas the so-called brāhmaṇa in a position of false prestige cannot purify even himself.

Here is a statement by Prahlāda Mahārāja, one of the twelve authorities, regarding the distinction between a devotee and a brāhmaṇa expert in karma-kāṇḍa, or Vedic ritualistic ceremonies. There are four varṇas and four āśramas, which divide human society, but the central principle is to become a first-class pure devotee. It is said in the Hari-bhakti-sudhodaya:

In this verse Prahlāda Mahārāja speaks of the vipras, the learned brāhmaṇas. The learned brāhmaṇa is considered best among the divisions of brāhmaṇa, kṣatriya, vaiśya and śūdra, but a devotee born in a low caṇḍāla family is better than such brāhmaṇas, not to speak of the kṣatriyas, vaiśyas and others. A devotee is better than anyone, for he is in the transcendental position on the Brahman platform.

"One who engages in full devotional service, who does not fall down in any circumstance, at once transcends the modes of material nature and thus comes to the level of Brahman." (BG 14.26) The twelve qualities of a first-class brāhmaṇa, as stated in the book called Sanat-sujāta, are as follows:

The European and American devotees in the Kṛṣṇa consciousness movement are sometimes accepted as brāhmaṇas, but the so-called caste brāhmaṇas are very much envious of them. In answer to such envy, Prahlāda Mahārāja says that one who has been born in a brāhmaṇa family but is falsely proud of his prestigious position cannot even purify himself, not to speak of his family, whereas if a caṇḍāla, a lowborn person, is a devotee and has fully surrendered unto the lotus feet of the Lord, he can purify his entire family. We have had actual experience of how Americans and Europeans, because of their full Kṛṣṇa consciousness, have purified their whole families, so much so that a mother of a devotee, at the time of her death, inquired about Kṛṣṇa with her last breath. Therefore it is theoretically true and has been practically proven that a devotee can give the best service to his family, his community, his society and his nation. The foolish accuse a devotee of following the principle of escapism, but actually the fact is that a devotee is the right person to elevate his family. A devotee engages everything in the service of the Lord, and therefore he is always exalted.