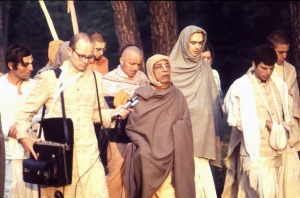 Hiraṇyakaśipu murmured to himself, "Lord Viṣṇu, who possesses great mystic power, has made this plan to kill me, but what is the use of such an attempt? Who can fight with me?" Thinking like this and taking up his club, Hiraṇyakaśipu attacked the Lord like an elephant.

In the jungle there are sometimes fights between lions and elephants. Here the Lord appeared like a lion, and Hiraṇyakaśipu, unafraid of the Lord, attacked Him like an elephant. Generally the elephant is defeated by the lion, and therefore the comparison in this verse is appropriate.