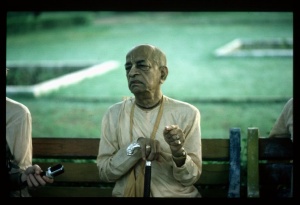 O most unfortunate Prahlāda, you have always described a supreme being other than me, a supreme being who is above everything, who is the controller of everyone, and who is all-pervading. But where is He? If He is everywhere, then why is He not present before me in this pillar?

Demons sometimes declare to a devotee that they cannot accept the existence of God because they cannot see Him. But what the demon does not know is stated by the Lord Himself in Bhagavad-gītā (BG 7.25): nāhaṁ prakāśaḥ sarvasya yogamāyā-samāvṛtaḥ. "I am never manifest to the foolish and unintelligent. For them I am covered by yogamāyā." The Lord is open to being seen by devotees, but nondevotees cannot see Him. The qualification for seeing God is stated in Brahma-saṁhitā (BS 5.38): premāñjana-cchurita-bhakti-vilocanena santaḥ sadaiva hṛdayeṣu vilokayanti. A devotee who has developed a genuine love for Kṛṣṇa can always see Him everywhere, whereas a demon, not having a clear understanding of the Supreme Lord, cannot see Him. When Hiraṇyakaśipu was threatening to kill Prahlāda Mahārāja, Prahlāda certainly saw the column standing before him and his father, and he saw that the Lord was present in the pillar to encourage him not to fear his demoniac father's words. The Lord was present to protect him. Hiraṇyakaśipu marked Prahlāda's observation and asked him, "Where is your God?" Prahlāda Mahārāja replied, "He is everywhere." Then Hiraṇyakaśipu asked, "Why is He not in this pillar before me?" Thus in all circumstances the devotee can always see the Supreme Lord, whereas the nondevotee cannot.

Prahlāda Mahārāja has here been addressed by his father as "the most unfortunate." Hiraṇyakaśipu thought himself extremely fortunate because he possessed the property of the universe. Prahlāda Mahārāja, his legitimate son, was to have inherited this vast property, but because of his impudence, he was going to die at his father's hands. Therefore the demoniac father considered Prahlāda the most unfortunate because Prahlāda would not be able to inherit his property. Hiraṇyakaśipu did not know that Prahlāda Mahārāja was the most fortunate person within the three worlds because Prahlāda was protected by the Supreme Personality of Godhead. Such are the misunderstandings of demons. They do not know that a devotee is protected by the Lord in all circumstances (kaunteya pratijānīhi na me bhaktaḥ praṇaśyati) (BG 9.31)).