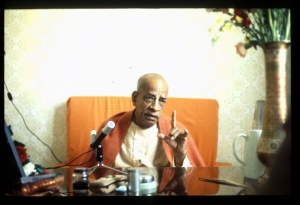 Ṣaṇḍa and Amarka, the teachers of Prahlāda Mahārāja, chastised and threatened their disciple in various ways and began teaching him about the paths of religion, economic development and sense gratification. This is the way they educated him.

In this verse the words prahrādaṁ grāhayām āsa are important. The words grāhayām āsa literally mean that they tried to induce Prahlāda Mahārāja to accept the paths of dharma, artha and kāma (religion, economic development and sense gratification). People are generally preoccupied with these three concerns, without interest in the path of liberation. Hiraṇyakaśipu, the father of Prahlāda Mahārāja, was simply interested in gold and sense enjoyment. The word hiraṇya means "gold," and kaśipu refers to soft cushions and bedding on which people enjoy sense gratification. The word prahlāda, however, refers to one who is always joyful in understanding Brahman (brahma-bhūtaḥ prasannātmā (BG 18.54)). Prahlāda means prasannātmā, always joyful. Prahlāda was always joyful in worshiping the Lord, but in accordance with the instructions of Hiraṇyakaśipu, the teachers were interested in teaching him about material things. Materialistic persons think that the path of religion is meant for improving their material conditions. The materialist goes to a temple to worship many varieties of demigods just to receive some benediction to improve his material life. He goes to a sādhu or so-called svāmī to take advantage of an easy method for achieving material opulence. In the name of religion, the so-called sādhus try to satisfy the senses of the materialists by showing them shortcuts to material opulence. Sometimes they give some talisman or blessing. Sometimes they attract materialistic persons by producing gold. Then they declare themselves God, and foolish materialists are attracted to them for economic development. As a result of this process of cheating, others are reluctant to accept a religious process, and instead they advise people in general to work for material advancement. This is going on all over the world. Not only now but since time immemorial, no one is interested in mokṣa, liberation. There are four principles—dharma (religion), artha (economic development), kāma (sense gratification) and mokṣa (liberation). People accept religion to become materially opulent. And why should one be materially opulent? For sense gratification. Thus people prefer these three mārgas, the three paths of materialistic life. No one is interested in liberation, and bhagavad-bhakti, devotional service to the Lord, is above even liberation. Therefore the process of devotional service, Kṛṣṇa consciousness, is extremely difficult to understand. This will be explained later by Prahlāda Mahārāja. The teachers Ṣaṇḍa and Amarka tried to induce Prahlāda Mahārāja to accept the materialistic way of life, but actually their attempt was a failure.