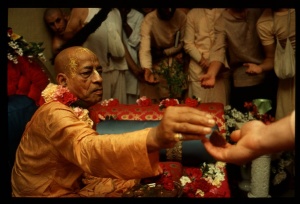 The Supreme Personality of Godhead has given up His natural tendency of equality toward the demons and demigods. Although He is the Supreme Person, now, influenced by māyā, He has assumed the form of a boar to please His devotees, the demigods, just as a restless child leans toward someone. I shall therefore sever Lord Viṣṇu's head from His trunk by my trident, and with the profuse blood from His body I shall please my brother Hiraṇyākṣa, who was so fond of sucking blood. Thus shall I too be peaceful.

The defect of the demoniac mentality is expressed in this verse very clearly. Hiraṇyakaśipu thought that Viṣṇu also becomes partial, like a child whose mind is not steady or resolute. The Lord can change His mind at any time, Hiraṇyakaśipu thought, and therefore His words and activities are like those of children. Actually, because the demons are ordinary human beings, their minds change, and being materially conditioned, they think that the Supreme Personality of Godhead is conditioned also. As the Lord says in Bhagavad-gītā (BG 9.11), avajānanti māṁ mūḍhā mānuṣīṁ tanum āśritam: "Fools deride Me when I descend in a human form."

Demons always think that Viṣṇu can be killed. Therefore, being absorbed in thoughts of Viṣṇu's form to kill Him, at least they have the opportunity to think of Viṣṇu unfavorably. Although they are not devotees, their thinking of Viṣṇu is effective, and thus they generally attain sāyujya-mukti. Because the demons consider the Supreme Lord an ordinary living being, they think that they can kill Lord Viṣṇu as one might kill an ordinary person. Another fact disclosed herein is that demons are very much fond of sucking blood. Indeed, all of them are meat-eaters and bloodsuckers.

Hiraṇyakaśipu accused the Supreme Lord of having a restless mind like that of a small child who can be induced to do anything if simply offered some cakes and lāḍḍus. Indirectly, this indicates the true position of the Supreme Personality of Godhead, who says in Bhagavad-gītā (BG 9.26):

"If one offers Me with love and devotion a leaf, a flower, fruit or water, I will accept it." The Lord accepts the offerings of devotees because of their transcendental love. Because they are in love with the Supreme Lord, they do not eat anything without offering it first to the Lord. The Lord does not hanker for a small leaf or flower; He has enough to eat. Indeed, He is feeding all living entities. Nonetheless, because He is very merciful and is bhakta-vatsala, very favorable to the devotees, He certainly eats whatever they offer Him with love and devotion. This quality should not be misjudged to be childish. The highest quality of the Supreme Lord is that He is bhakta-vatsala; in other words, He is always extremely pleased with His devotees. As for the word māyā, when used in reference to the dealings of the Supreme Personality of Godhead and His devotees, this word means "affection." The actions of the Lord to favor His devotees are not disqualifications but signs of His natural affection.

As for rudhira, or the blood of Lord Viṣṇu, since there is no possibility of severing Lord Viṣṇu's head from His body, there is no question of blood. But the garland that decorates Viṣṇu's body is as red as blood. When the demons achieve sāyujya-mukti and leave behind their sinful activities, they are blessed by Viṣṇu's garland, which is red like blood. After attaining sāyujya-mukti, the demons are sometimes promoted to the Vaikuṇṭha world, where they receive the reward of the Lord's garland prasāda.