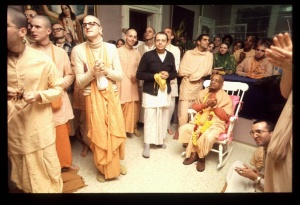 Thus Yamarāja, in the guise of a small boy, told all the queens: You are all so foolish that you lament but do not see your own death. Afflicted by a poor fund of knowledge, you do not know that even if you lament for your dead husband for hundreds of years, you will never get him back alive, and in the meantime your lives will be finished.

Hundreds and thousands of living entities meet death at every moment, but a foolish living being nonetheless thinks himself deathless and does not prepare for death. This is the most wonderful thing in this world. Everyone has to die because everyone is fully under the control of material nature, yet everyone thinks that he is independent, that whatever he likes he can do, that he will never meet death but live forever, and so on. So-called scientists are making various plans by which living entities in the future can live forever, but while they are thus pursuing such scientific knowledge, Yamarāja, in due course of time, will take them away from their business of so-called research.