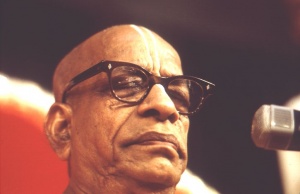 The boy addressed the women: O weak women! Only by the will of the Supreme Personality of Godhead, who is never diminished, is the entire world created, maintained and again annihilated. This is the verdict of the Vedic knowledge. This material creation, consisting of the moving and nonmoving, is exactly like His plaything. Being the Supreme Lord, He is completely competent to destroy and protect.

In this regard the queens might argue, "If our husband was protected by the Supreme Personality of Godhead when in the womb, why has he not been given protection now?" To this question the answer is, ya icchayeśaḥ sṛjatīdam avyayo ya eva rakṣaty avalumpate ca yaḥ. One cannot argue with the activities of the Supreme Personality of Godhead. The Lord is always free, and therefore He can protect and can also annihilate. He is not our order carrier; whatever He likes He will do. Therefore He is the Supreme Lord. The Lord does not create this material world at anyone's request, and therefore He can annihilate everything merely by His will. That is His supremacy. If one argues, "Why does He act in this way?" the answer is that He can do so because He is supreme. No one can question His activities. If one argues, "What is the purpose of this sinful creation and annihilation?" the answer is that to prove His omnipotence He can do anything, and no one can question Him. If He were answerable to us concerning why He does something and why He does not, His supremacy would be curtailed.