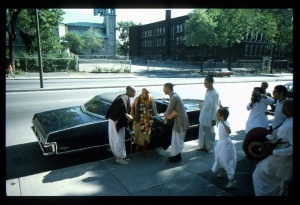 Because of the movements of the water, the trees on the bank of a river, when reflected on the water, seem to move. Similarly, when the eyes move because of some mental derangement, the land appears to move also.

Sometimes, because of mental derangement, the land appears to be moving. A drunkard, for example, or a person with heart disease, sometimes feels that the land is moving. Similarly, the reflections of trees in a flowing river also appear to move. These are the actions of māyā. Actually the living entity does not move (sthāṇur acalo 'yam). The living entity does not take birth or accept death, but because of the transient subtle and gross bodies, the living entity appears to move from one place to another or be dead and gone forever. As the great Bengali Vaiṣṇava poet, Jagadānanda Paṇḍita, has said:

According to this statement from the Prema-vivarta, when a living entity is conditioned by material nature, he is exactly like a person haunted by a ghost. One should therefore understand the fixed position of the spirit soul and how he is carried away by the waves of material nature to different bodies and different situations under lamentation and hankering. One achieves the success of life when he understands the constitutional position of his self and is undisturbed by the conditions created by material nature (prakṛteḥ kriyamāṇāni guṇaiḥ karmāṇi sarvaśaḥ (BG 3.27)).