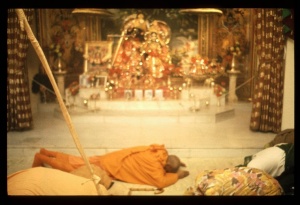 Once there was a saṅkīrtana festival to glorify the Supreme Lord in an assembly of the demigods, and the Gandharvas and Apsarās were invited by the prajāpatis to take part in it.

Saṅkīrtana means chanting of the holy name of the Lord. The Hare Kṛṣṇa movement is not a new movement as people sometimes mistakenly think. The Hare Kṛṣṇa movement is present in every millennium of Lord Brahmā's life, and the holy name is chanted in all the higher planetary systems, including Brahmaloka and Candraloka, not to speak of Gandharvaloka and Apsaroloka. The saṅkīrtana movement that was started in this world five hundred years ago by Śrī Caitanya Mahāprabhu is therefore not a new movement. Sometimes, because of our bad luck, this movement is stopped, but Śrī Caitanya Mahāprabhu and His servants again start the movement for the benefit of the entire world or, indeed, the entire universe.