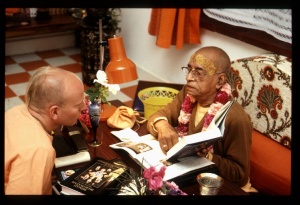 O King Yudhiṣṭhira, because of your service to the Supreme Lord, all of you Pāṇḍavas defeated the greatest dangers posed by numerous kings and demigods. By serving the lotus feet of Kṛṣṇa, you conquered great enemies, who were like elephants, and thus you collected ingredients for sacrifice. By His grace, may you be delivered from material involvement.

Placing himself as an ordinary householder, Mahārāja Yudhiṣṭhira inquired from Nārada Muni how a gṛha-mūḍha-dhī, a person who is entangled in household life and who thus continues to remain a fool, can be delivered. Nārada Muni encouraged Mahārāja Yudhiṣṭhira by saying, "You are already on the safe side because you, along with your entire family, have become a pure devotee of Kṛṣṇa." By Kṛṣṇa's grace, the Pāṇḍavas conquered in the Battle of Kurukṣetra and were saved from many dangers posed not only by kings but sometimes even by the demigods. Thus they are a practical example of how to live in security and safety by the grace of Kṛṣṇa. Everyone should follow the example of the Pāṇḍavas, who showed how to be saved by the grace of Kṛṣṇa. Our Kṛṣṇa consciousness movement is intended to teach how everyone can live peacefully in this material world and at the end of life return home, back to Godhead. In the material world there are always dangers at every step (padaṁ padaṁ yad vipadāṁ na teṣām (SB 10.14.58)). Nonetheless, if one takes shelter of Kṛṣṇa without hesitation and keeps under the shelter of Kṛṣṇa, he can easily cross the ocean of nescience. Samāśritā ye pada-pallava-plavaṁ mahat-padaṁ puṇya-yaśo murāreḥ. To the devotee, this great ocean of nescience becomes like a puddle of water in the hoofprint of a cow. A pure devotee, without embarrassing himself by trying for elevation in so many ways, stays in the safest position as a servant of Kṛṣṇa, and thus his life is eternally safe without a doubt.