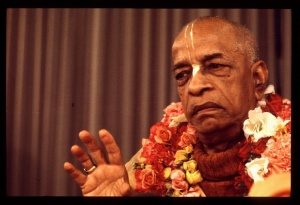 On his path of ascent, the progressive living entity enters the different worlds of fire, the sun, the day, the end of the day, the bright fortnight, the full moon, and the passing of the sun in the north, along with their presiding demigods. When he enters Brahmaloka, he enjoys life for many millions of years, and finally his material designation comes to an end. He then comes to a subtle designation, from which he attains the causal designation, witnessing all previous states. Upon the annihilation of this causal state, he attains his pure state, in which he identifies with the Supersoul. In this way the living entity becomes transcendental.