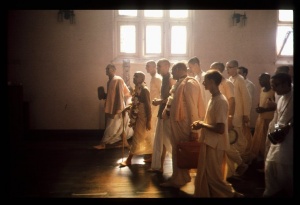 A sannyāsī must not present allurements of material benefits to gather many disciples, nor should he unnecessarily read many books or give discourses as a means of livelihood. He must never attempt to increase material opulences unnecessarily.