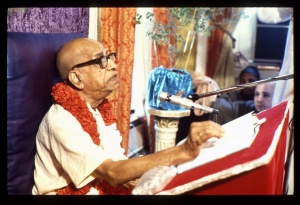 A learned, thoughtful person must realize that material existence is illusion. This is possible only by self-realization. A self-realized person, who has actually seen the truth, should retire from all material activities, being situated in self-realization.

By an analytical study of the entire constitution of the body, one can surely come to the conclusion that the soul is different from all the body's material constituents, such as earth, water, fire and air. Thus the difference between the body and soul can be realized by a person who is thoughtful (manīṣī or muni), and after this realization of the individual spirit soul one can very easily understand the supreme spirit soul. If one thus realizes that the individual soul is subordinate to the supreme spirit soul, he achieves self-realization. As explained in the Thirteenth Chapter of Bhagavad-gītā, there are two souls within the body. The body is called kṣetra, and there are two kṣetra jñas, or occupants of the body, namely the Supersoul (Paramātmā) and the individual soul. The Supersoul and the individual soul are like two birds sitting on the same tree (the material body). One bird, the individual, forgetful bird, is eating the fruit of the tree, not caring for the instructions of the other bird, which is only a witness to the activities of the first bird, who is his friend. When the forgetful bird comes to understand the supreme friend who is always with him and trying to give him guidance in different bodies, he takes shelter at the lotus feet of that supreme bird. As explained in the yoga process, dhyānāvasthita-tad-gatena manasā paśyanti yaṁ yoginaḥ (SB 12.13.1). When one actually becomes a perfect yogī, by meditation he can see the supreme friend and surrender unto Him. This is the beginning of bhakti-yoga, or actual life in Kṛṣṇa consciousness.