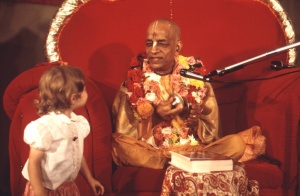 Because they are bewildered by the illusory energy of the Supreme Personality of Godhead, Yājñavalkya and Jaimini and other compilers of the religious scriptures cannot know the secret, confidential religious system of the twelve mahājanas. They cannot understand the transcendental value of performing devotional service or chanting the Hare Kṛṣṇa mantra. Because their minds are attracted to the ritualistic ceremonies mentioned in the Vedas—especially the Yajur Veda, Sāma Veda and Ṛg Veda—their intelligence has become dull. Thus they are busy collecting the ingredients for ritualistic ceremonies that yield only temporary benefits, such as elevation to Svargaloka for material happiness. They are not attracted to the saṅkīrtana movement; instead, they are interested in dharma, artha, kāma and mokṣa.

Since one may easily achieve the highest success by chanting the holy name of the Lord, one may ask why there are so many Vedic ritualistic ceremonies and why people are attracted to them. This verse answers that question. As stated in Bhagavad-gītā (BG 15.15), vedaiś ca sarvair aham eva vedyaḥ: the real purpose of studying the Vedas is to approach the lotus feet of Lord Kṛṣṇa. Unfortunately, unintelligent people bewildered by the grandeur of Vedic yajñas want to see gorgeous sacrifices performed. They want Vedic mantras chanted and huge amounts of money spent for such ceremonies. Sometimes we have to observe the Vedic ritualistic ceremonies to please such unintelligent men. Recently, when we established a large Kṛṣṇa-Balarāma temple in Vṛndāvana, we were obliged to have Vedic ceremonies enacted by brāhmaṇas because the inhabitants of Vṛndāvana, especially the smārta-brāhmaṇas, would not accept Europeans and Americans as bona fide brāhmaṇas. Thus we had to engage brāhmaṇas to perform costly yajñas. In spite of these yajñas, the members of our Society performed saṅkīrtana loudly with mṛdaṅgas, and I considered the saṅkīrtana more important than the Vedic ritualistic ceremonies. Both the ceremonies and the saṅkīrtana were going on simultaneously. The ceremonies were meant for persons interested in Vedic rituals for elevation to heavenly planets (jaḍī-kṛta-matir madhu-puṣpitāyām), whereas the saṅkīrtana was meant for pure devotees interested in pleasing the Supreme Personality of Godhead. We would simply have performed saṅkīrtana, but then the inhabitants of Vṛndāvana would not have taken the installation ceremony seriously. As explained here, the Vedic performances are meant for those whose intelligence has been dulled by the flowery language of the Vedas, which describe fruitive activities intended to elevate one to the higher planets.

Especially in this age of Kali, saṅkīrtana alone is sufficient. If the members of our temples in the different parts of the world simply continue saṅkīrtana before the Deity, especially before Śrī Caitanya Mahāprabhu, they will remain perfect. There is no need of any other performances. Nevertheless, to keep oneself clean in habits and mind, Deity worship and other regulative principles are required. Śrīla Jīva Gosvāmī says that although saṅkīrtana is sufficient for the perfection of life, the arcanā, or worship of the Deity in the temple, must continue in order that the devotees may stay clean and pure. Śrīla Bhaktisiddhānta Sarasvatī Ṭhākura therefore recommended that one follow both processes simultaneously. We strictly follow his principle of performing Deity worship and saṅkīrtana along parallel lines. This we should continue.