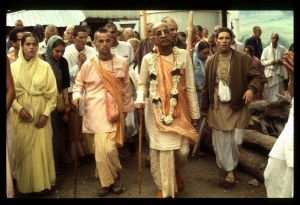 By the mystic power of Nārada Muni, the living entity reentered his dead body for a short time and spoke in reply to Nārada Muni's request. He said: According to the results of my fruitive activities, I, the living being, transmigrate from one body to another, sometimes going to the species of the demigods, sometimes to the species of lower animals, sometimes among the vegetables, and sometimes to the human species. Therefore, in which birth were these my mother and father? No one is actually my mother and father. How can I accept these two people as my parents?

Here it is made clear that the living being enters a material body that is like a machine created by the five gross elements of material nature (earth, water, fire, air and sky) and the three subtle elements (mind, intelligence and ego). As confirmed in Bhagavad-gītā, there are two separate identities, called the inferior and superior natures, which both belong to the Supreme Personality of Godhead. According to the results of a living entity's fruitive actions, he is forced to enter the material elements in different types of bodies.