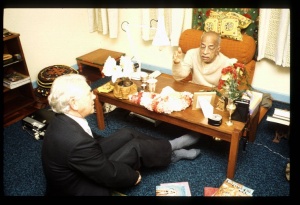 O Supreme Lord, if persons obsessed with material desires for sense gratification through material opulence worship You, who are the source of all knowledge and are transcendental to material qualities, they are not subject to material rebirth, just as sterilized or fried seeds do not produce plants. Living entities are subjected to the repetition of birth and death because they are conditioned by material nature, but since You are transcendental, one who is inclined to associate with You in transcendence escapes the conditions of material nature.

This is confirmed in Bhagavad-gītā (BG 4.9), wherein the Lord says:

"One who knows the transcendental nature of My appearance and activities does not, upon leaving the body, take his birth again in this material world, but attains My eternal abode, O Arjuna." If one simply engages in Kṛṣṇa consciousness to understand Kṛṣṇa, he surely becomes immune to the process of repeated birth and death. As clearly stated in Bhagavad-gītā, tyaktvā dehaṁ punar janma naiti: (BG 4.9) such a person, simply by engaging in Kṛṣṇa consciousness or understanding the Supreme Personality of Godhead, Kṛṣṇa, becomes quite fit to return home, back to Godhead. Even those who are obsessed with material desires may also come to worship the Supreme Personality of Godhead so steadily that they go back to Godhead. The fact is that if one comes to Kṛṣṇa consciousness, although he may have many material desires, he becomes increasingly attracted to the lotus feet of Kṛṣṇa through associating with the Supreme Lord by chanting His holy name. The Supreme Lord and His holy name are identical. Thus he becomes uninterested in attachment to material enjoyment. The perfection of life is to be uninterested in material enjoyment and interested in Kṛṣṇa. If one comes to Kṛṣṇa consciousness somehow or other, even for material gain, the result is that he will be liberated. Kāmād dveṣād bhayāt snehāt. Whether for the satisfaction of material desires, because of the influence of envy, because of fear, because of affection or because of any other reason, if one comes to Kṛṣṇa, his life is successful.