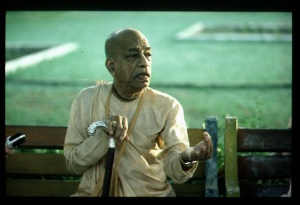 Mahārāja Parīkṣit inquired from Śukadeva Gosvāmī: O great sage, what was the reason for Indra's unhappiness? I wish to hear about this. When he killed Vṛtrāsura, all the demigods were extremely happy. Why, then, was Indra himself unhappy?

This, of course, is a very intelligent question. When a demon is killed, certainly all the demigods are happy. In this case, however, when all the demigods were happy because of Vṛtrāsura's having been killed, Indra was unhappy. Why? It may be suggested that Indra was unhappy because he knew that he had killed a great devotee and brāhmaṇa. Vṛtrāsura outwardly appeared to be a demon, but inwardly he was a great devotee and therefore a great brāhmaṇa.

Herein it is clearly indicated that a person who is not at all demoniac, such as Prahlāda Mahārāja and Bali Mahārāja, may outwardly be a demon or be born in a family of demons. Therefore in terms of real culture one should not be considered a demigod or demon simply according to birth. In his dealings while fighting with Indra, Vṛtrāsura proved himself a great devotee of the Supreme Personality of Godhead. Furthermore, as soon as he finished fighting with Indra and was apparently killed, Vṛtrāsura was transferred to Vaikuṇṭhaloka to become an associate of Saṅkarṣaṇa. Indra knew this, and therefore he was morose at having killed such a demon, who was actually a Vaiṣṇava or brāhmaṇa.

A Vaiṣṇava is already a brāhmaṇa, although a brāhmaṇa may not be a Vaiṣṇava. The Padma Purāṇa says:

One may be a brāhmaṇa in terms of his culture and family and may be expert in Vedic knowledge (mantra-tantra-viśāradaḥ), but if he is not a Vaiṣṇava, he cannot be a guru. This means that an expert brāhmaṇa may not be a Vaiṣṇava, but a Vaiṣṇava is already a brāhmaṇa. A millionaire may very easily possess hundreds and thousands of dollars, but a person with hundreds and thousands of dollars is not necessarily a millionaire. Vṛtrāsura was a perfect Vaiṣṇava, and therefore he was also a brāhmaṇa.