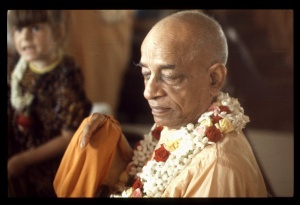 The Yamadūtas replied: That which is prescribed in the Vedas constitutes dharma, the religious principles, and the opposite of that is irreligion. The Vedas are directly the Supreme Personality of Godhead, Nārāyaṇa, and are self-born. This we have heard from Yamarāja.

The servants of Yamarāja replied quite properly. They did not manufacture principles of religion or irreligion. Instead, they explained what they had heard from the authority Yamarāja. Mahājano yena gataḥ sa panthāḥ: (CC Madhya 17.186) one should follow the mahājana, the authorized person. Yamarāja is one of twelve authorities. Therefore the servants of Yamarāja, the Yamadūtas, replied with perfect clarity when they said śuśruma ("we have heard"). The members of modern civilization manufacture defective religious principles through speculative concoction. This is not dharma. They do not know what is dharma and what is adharma. Therefore, as stated in the beginning of Śrīmad-Bhāgavatam, dharmaḥ projjhita-kaitavo 'tra: (SB 1.1.2) dharma not supported by the Vedas is rejected from śrīmad-bhāgavata-dharma. Bhāgavata-dharma comprises only that which is given by the Supreme Personality of Godhead. Bhāgavata-dharma is sarva-dharmān parityajya mām ekaṁ śaraṇaṁ vraja: (BG 18.66) one must accept the authority of the Supreme Personality of Godhead and surrender to Him and whatever He says. That is dharma. Arjuna, for example, thinking that violence was adharma, was declining to fight, but Kṛṣṇa urged him to fight. Arjuna abided by the orders of Kṛṣṇa, and therefore he is actually a dharmī because the order of Kṛṣṇa is dharma. Kṛṣṇa says in Bhagavad-gītā (BG 15.15), vedaiś ca sarvair aham eva vedyaḥ: "The real purpose of veda, knowledge, is to know Me." One who knows Kṛṣṇa perfectly is liberated. As Kṛṣṇa says in Bhagavad-gītā (BG 4.9):

"One who knows the transcendental nature of My appearance and activities does not, upon leaving the body, take his birth again in this material world, but attains My eternal abode, O Arjuna." One who understands Kṛṣṇa and abides by His order is a candidate for returning home, back to Godhead. It may be concluded that dharma, religion, refers to that which is ordered in the Vedas, and adharma, irreligion, refers to that which is not supported in the Vedas.

Dharma is not actually manufactured by Nārāyaṇa. As stated in the Vedas, asya mahato bhūtasya niśvasitam etad yad ṛg-vedaḥ iti: the injunctions of dharma emanate from the breathing of Nārāyaṇa, the supreme living entity. Nārāyaṇa exists eternally and breathes eternally, and therefore dharma, the injunctions of Nārāyaṇa, also exist eternally. Śrīla Madhvācārya, the original ācārya for those who belong to the Mādhva-Gauḍīya-sampradāya, says:

The transcendental words of the Vedas emanated from the mouth of the Supreme Personality of Godhead. Therefore the Vedic principles should be understood to be Vaiṣṇava principles because Viṣṇu is the origin of the Vedas. The Vedas contain nothing besides the instructions of Viṣṇu, and one who follows the Vedic principles is a Vaiṣṇava. The Vaiṣṇava is not a member of a manufactured community of this material world. A Vaiṣṇava is a real knower of the Vedas, as confirmed in Bhagavad-gītā (vedaiś ca sarvair aham eva vedyaḥ (BG 15.15)).