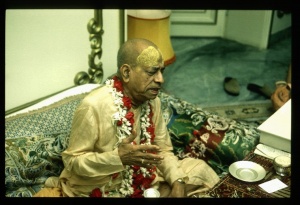 That old man Ajāmila had ten sons, of whom the youngest was a baby named Nārāyaṇa. Since Nārāyaṇa was the youngest of all the sons, he was naturally very dear to both his father and his mother.

The word pravayasaḥ indicates Ajāmila's sinfulness because although he was eighty-eight years old, he had a very young child. According to Vedic culture, one should leave home as soon as he has reached fifty years of age; one should not live at home and go on producing children. Sex life is allowed for twenty-five years, between the ages of twenty-five and forty-five or, at the most, fifty. After that one should give up the habit of sex life and leave home as a vānaprastha and then properly take sannyāsa. Ajāmila, however, because of his association with a prostitute, lost all brahminical culture and became most sinful, even in his so-called household life.