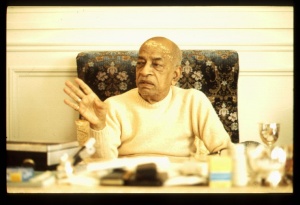 After performing the preliminaries of various sacrifices, Mahārāja Bharata offered the results in the name of religion to the Supreme Personality of Godhead, Vāsudeva. In other words, he performed all the yajñas for the satisfaction of Lord Vāsudeva, Kṛṣṇa. Mahārāja Bharata thought that since the demigods were different parts of Vāsudeva's body, He controls those who are explained in the Vedic mantras. By thinking in this way, Mahārāja Bharata was freed from all material contamination, such as attachment, lust and greed. When the priests were about to offer the sacrificial ingredients into the fire, Mahārāja Bharata expertly understood how the offering made to different demigods was simply an offering to the different limbs of the Lord. For instance, Indra is the arm of the Supreme Personality of Godhead, and Sūrya [the sun] is His eye. Thus Mahārāja Bharata considered that the oblations offered to different demigods were actually offered unto the different limbs of Lord Vāsudeva.

The Supreme Personality of Godhead says that as long as one does not develop the pure devotional service of śravaṇaṁ kīrtanam (SB 7.5.23), hearing and chanting, one must carry out his prescribed duties. Since Bharata Mahārāja was a great devotee, one may ask why he performed so many sacrifices that are actually meant for karmīs. The fact is that he was simply following the orders of Vāsudeva. As Kṛṣṇa says in Bhagavad-gītā, sarva dharmān parityajya mām ekaṁ śaraṇaṁ vraja: "Abandon all varieties of religion and just surrender unto Me." (BG 18.66) Whatever we do, we should constantly remember Vāsudeva. People are generally addicted to offering obeisances to various demigods, but Bharata Mahārāja simply wanted to please Lord Vāsudeva. As stated in Bhagavad-gītā: bhoktāraṁ yajña-tapasāṁ sarva-loka-maheśvaram (BG 5.29). A yajña may be carried out to satisfy a particular demigod, but when the yajña is offered to the yajña-puruṣa, Nārāyaṇa, the demigods are satisfied. The purpose of performing different yajñas is to satisfy the Supreme Lord. One may perform them in the name of different demigods or directly. If we directly offer oblations to the Supreme Personality of Godhead, the demigods are automatically satisfied. If we water the root of a tree, the branches, twigs, fruits and flowers are automatically satisfied. When one offers sacrifices to different demigods, one should remember that the demigods are simply parts of the body of the Supreme. If we worship the hand of a person, we intend to satisfy the person himself. If we massage a person's legs, we do not really serve the legs but the person who possesses the legs. All the demigods are different parts of the Lord, and if we offer service to them, we actually serve the Lord Himself. Demigod worship is mentioned in Brahma-saṁhitā, but actually the ślokas advocate worship of the Supreme Personality of Godhead, Govinda. For instance, worship of the goddess Durgā is mentioned this way in Brahma-saṁhitā (BS 5.38):

Following the orders of Śrī Kṛṣṇa, the goddess Durgā creates, maintains and annihilates. Śrī Kṛṣṇa also confirms this statement in Bhagavad-gītā. Mayādhyakṣeṇa prakṛtiḥ sūyate sa-carācaram: "This material nature is working under My direction, O son of Kuntī, and it is producing all moving and unmoving beings." (BG 9.10)

We should worship the demigods in that spirit. Because the goddess Durgā satisfies Kṛṣṇa, we should therefore offer respects to goddess Durgā. Because Lord Śiva is nothing but Kṛṣṇa's functional body, we should therefore offer respects to Lord Śiva. Similarly, we should offer respects to Brahmā, Agni and Sūrya. There are many offerings to different demigods, and one should always remember that these offerings are usually meant to satisfy the Supreme Personality of Godhead. Bharata Mahārāja did not aspire to receive some benediction from demigods. His aim was to please the Supreme Lord. In the Mahābhārata, among the thousand names of Viṣṇu, it is said yajña-bhug yajña-kṛd yajñaḥ. The enjoyer of yajña, the performer of yajña and yajña itself are the Supreme Lord. The Supreme Lord is the performer of everything, but out of ignorance the living entity thinks that he is the actor. As long as we think we are the actors, we bring about karma-bandha (bondage to activity). If we act for yajña, for Kṛṣṇa. there is no karma-bandha. Yajñārthāt karmaṇo 'nyatra loko 'yaṁ karma-bandhanaḥ: (BG 3.9)) "Work done as a sacrifice for Viṣṇu has to be performed. otherwise work binds one to this material world." (BG 3.9)

Following the instructions of Bharata Mahārāja, we should act not for our personal satisfaction but for the satisfaction of the Supreme Personality of Godhead. In Bhagavad-gītā (BG 17.28) it is also stated:

Sacrifices, austerities and charities performed without faith in the Supreme Personality of Godhead are nonpermanent. Regardless of whatever rituals are performed, they are called asat, nonpermanent. They are therefore useless both in this life and the next.

Kings like Mahārāja Ambarīṣa and many other rājarṣis who were pure devotees of the Lord simply passed their time in the service of the Supreme Lord. When a pure devotee executes some service through the agency of another person, he should not be criticized, for his activities are meant for the satisfaction of the Supreme Lord. A devotee may have a priest perform some karma-kāṇḍa, and the priest may not be a pure Vaiṣṇava, but because the devotee wants to please the Supreme Lord, he should not be criticized. The word apūrva is very significant. The resultant actions of karma are called apūrva. When we act piously or impiously, immediate results do not ensue. We therefore wait for the results, which are called apūrva. The results are manifest in the future. Even the smārtas accept this apūrva. Pure devotees simply act for the pleasure of the Supreme Personality of Godhead; therefore the results of their activities are spiritual, or permanent. They are not like those of the karmīs, which are nonpermanent. This is confirmed in Bhagavad-gītā (BG 4.23):

"The work of a man who is unattached to the modes of material nature and who is fully situated in transcendental knowledge merges entirely into transcendence."

A devotee is always free from material contamination. He is fully situated in knowledge, and therefore his sacrifices are intended for the satisfaction of the Supreme Personality of Godhead.