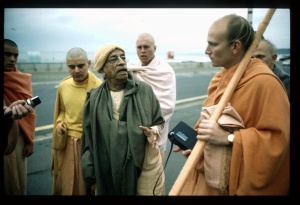 The attraction between male and female is the basic principle of material existence. On the basis of this misconception, which ties together the hearts of the male and female, one becomes attracted to his body, home, property, children, relatives and wealth. In this way one increases life's illusions and thinks in terms of "I and mine."

Sex serves as the natural attraction between man and woman, and when they are married, their relationship becomes more involved. Due to the entangling relationship between man and woman, there is a sense of illusion whereby one thinks, "This man is my husband," or "This woman is my wife." This is called hṛdaya-granthi, "the hard knot in the heart." This knot is very difficult to undo, even though a man and woman separate either for the principles of varṇāśrama or simply to get a divorce. In any case, the man always thinks of the woman, and the woman always thinks of the man. Thus a person becomes materially attached to family, property and children, although all of these are temporary. The possessor unfortunately identifies with his property and wealth. Sometimes, even after renunciation, one becomes attached to a temple or to the few things that constitute the property of a sannyāsī, but such attachment is not as strong as family attachment. The attachment to the family is the strongest illusion. In the Satya-saṁhitā, it is stated:

Sometimes it is found among exalted personalities like Lord Brahmā that the wife and children are not a cause of bondage. On the contrary, the wife actually helps further spiritual life and liberation. Nonetheless, most people are bound by the knots of the marital relationship, and consequently they forget their relationship with Kṛṣṇa.