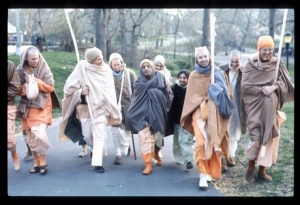 The Vedas are My eternal transcendental sound incarnation. Therefore the Vedas are śabda-brahma. In this world, the brāhmaṇas thoroughly study all the Vedas, and because they assimilate the Vedic conclusions, they are also to be considered the Vedas personified. The brāhmaṇas are situated in the supreme transcendental mode of nature-sattva-guṇa. Because of this, they are fixed in mind control [śama], sense control [dama], and truthfulness [satya]. They describe the Vedas in their original sense, and out of mercy [anugraha] they preach the purpose of the Vedas to all conditioned souls. They practice penance [tapasya] and tolerance [titikṣā], and they realize the position of the living entity and the Supreme Lord [anubhava]. These are the eight qualifications of the brāhmaṇas. Therefore among all living entities, no one is superior to the brāhmaṇas.

This is a true description of a brāhmaṇa. A brāhmaṇa is one who has assimilated the Vedic conclusions by practicing mind and sense control. He speaks the true version of all the Vedas. As confirmed in the Bhagavad-gītā (BG 15.15): vedaiś ca sarvair aham eva vedyaḥ. By studying all the Vedas, one should come to understand the transcendental position of Lord Śrī Kṛṣṇa. One who actually assimilated the essence of the Vedas can preach the truth. He is compassionate to conditioned souls who are suffering the threefold miseries of this conditional world due to their not being Kṛṣṇa conscious. A brāhmaṇa should take pity on the people and preach Kṛṣṇa consciousness in order to elevate them. Śrī Kṛṣṇa Himself, the Supreme Personality of Godhead, personally descends into this universe from the spiritual kingdom to teach conditioned souls about the values of spiritual life. He tries to induce them to surrender unto Him. Similarly, the brāhmaṇas do the same thing. After assimilating the Vedic instructions, they assist the Supreme Lord in His endeavor to deliver conditioned souls. The brāhmaṇas are very dear to the Supreme Lord due to their high sattva-guṇa qualities, and they also engage in welfare activities for all conditioned souls in the material world.