Srimad-Bhagavatam - Fifth Canto - Chapter 4: The Characteristics of Ṛṣabhadeva, the Supreme Personality of Godhead 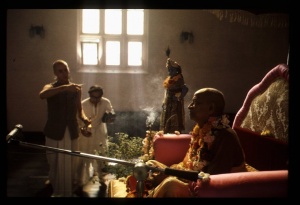 Indra, the King of heaven, who is very materially opulent, became envious of King Ṛṣabhadeva. Consequently he stopped pouring water on the planet known as Bhārata-varṣa. At that time the Supreme Lord, Ṛṣabhadeva, the master of all mystic power, understood King Indra's purpose and smiled a little. Then, by His own prowess, through yogamāyā [His internal potency], He profusely poured water upon His own place, which was known as Ajanābha.

We find the word bhagavān used twice in this verse. Both King Indra and Ṛṣabhadeva, the incarnation of the Supreme Lord, are described as bhagavān. Sometimes Nārada and Lord Brahmā are also addressed as bhagavān. The word bhagavān means that one is a very opulent and powerful person like Lord Brahmā, Lord Śiva, Nārada or Indra. They are all addressed as bhagavān due to their extraordinary opulence. King Ṛṣabhadeva is an incarnation of the Supreme Lord, and therefore He was the original Bhagavān. Consequently He is described herein as yogeśvara, which indicates that He has the most powerful spiritual potency. He is not dependent on King Indra for water. He can supply water Himself, and He did so in this case. In Bhagavad-gītā, it is stated: yajñād bhavati parjanyaḥ (BG 3.14). Due to the performance of yajña, clouds of water are manifest in the sky. Clouds and rainfall are under the management of Indra, the heavenly King, but when Indra is neglectful, the Supreme Lord Himself, who is also known as yajña or yajña-pati, takes the task upon Himself. Consequently there was sufficient rainfall in the place named Ajanābha. When yajña-pati wants to, He can do anything without the help of any subordinate. Therefore the Supreme Lord is known as almighty. In the present age of Kali there will eventually be a great scarcity of water (anāvṛṣṭi), for the general populace, due to ignorance and the scarcity of yajñic ingredients, will neglect to perform yajñas. Śrīmad-Bhāgavatam therefore advises: yajñaiḥ saṅkīrtana-prāyaiḥ yajanti hi sumedhasaḥ. After all, yajña is meant to satisfy the Supreme Personality of Godhead. In this age of Kali. there is great scarcity and ignorance; nonetheless, everyone can perform saṅkīrtana-yajña. Every family in every society can conduct saṅkīrtana-yajña at least every evening. In this way there will be no disturbance or scarcity of rain. It is essential for the people in this age to perform the saṅkīrtana-yajña in order to be materially happy and to advance spiritually.