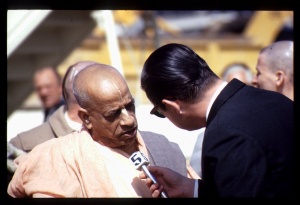 In the performance of a sacrifice, there are seven transcendental means to obtain the mercy of the Supreme Personality of Godhead: (1) by sacrificing valuable things or eatables, (2) by acting in terms of place, (3) by acting in terms of time, (4) by offering hymns, (5) by going through the priest, (6) by offering gifts to the priests and (7) by observing the regulative principles. However, one cannot always obtain the Supreme Lord through this paraphernalia. Nonetheless, the Lord is affectionate to His devotee; therefore when Mahārāja Nābhi, who was a devotee, worshiped and offered prayers to the Lord with great faith and devotion and with a pure uncontaminated mind, superficially performing some yajña in the line of pravargya, the kind Supreme Personality of Godhead, due to His affection for His devotees, appeared before King Nābhi in His unconquerable and captivating form with four hands. In this way, to fulfill the desire of His devotee, the Supreme Personality of Godhead manifested Himself in His beautiful body before His devotee. This body pleases the mind and eyes of the devotees.

In Bhagavad-gītā it is clearly said:

"One can understand the Supreme Personality as He is only by devotional service. And when one is in full consciousness of the Supreme Lord by such devotion, he can enter into the kingdom of God." (BG 18.55)

One can understand and see the Supreme Personality of Godhead through the process of devotional service, and not in any other way. Although Mahārāja Nābhi performed prescribed duties and sacrifices, it should still be considered that the Lord appeared before him not due to his sacrifices but because of his devotional service. It was for this reason that the Lord agreed to appear before him in His beautiful bodily features. As stated in Brahma-saṁhitā (BS 5.38), the Supreme Lord in His original nature is very beautiful. Veṇuṁ kvaṇantam aravinda-dalāyatākṣaṁ barhāvataṁsam asitāmbuda-sundarāṅgam: the Supreme Personality of Godhead, although blackish, is very, very beautiful.