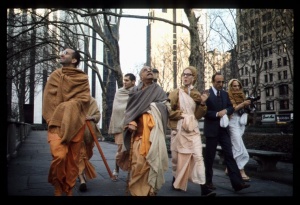 O most worshipable of all, You are the best of all benefactors, and Your appearance at saintly King Nābhi's sacrificial arena is meant for our benediction. Because You have been seen by us, You have bestowed upon us the most valuable benediction.

Nija-puruṣa-īkṣaṇa-viṣaya. In Bhagavad-gītā (BG 9.29) Kṛṣṇa says, samo 'haṁ sarva-bhūteṣu: "I envy no one, nor am I partial to anyone. I am equal to all. But whoever renders service unto Me in devotion is a friend, is in Me, and I am also a friend to him."

The Supreme Personality of Godhead is equal to everyone. In that sense, He has no enemies and no friends. Everyone is enjoying the fruitive reactions of his own work, and the Lord, within everyone's heart, is observing and giving everyone the desired result. However, just as the devotees are always anxious to see the Supreme Lord satisfied in every way, similarly the Supreme Lord is very anxious to present Himself before His devotees. Śrī Kṛṣṇa says in Bhagavad-gītā (BG 4.8):

"To deliver the pious and to annihilate the miscreants, as well as to reestablish the principles of religion, I advent Myself millennium after millennium."

Thus Kṛṣṇa's appearance is for the deliverance and satisfaction of His devotees. Actually He does not advent Himself simply to kill the demons, for that can be done by His agents. Lord Viṣṇu's appearance at the sacrificial arena of Mahārāja Nābhi was just to please the King and his assistants. Otherwise there was no reason for His being present there.