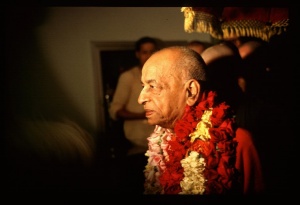 If a foolish member of the twice-born classes [brāhmaṇa, kṣatriya and vaiśya] forces his wife to drink his semen out of a lusty desire to keep her under control, he is put after death into the hell known as Lālābhakṣa. There he is thrown into a flowing river of semen, which he is forced to drink.

The practice of forcing one's wife to drink one's own semen is a black art practiced by extremely lusty persons. Those who practice this very abominable activity say that if a wife is forced to drink her husband's semen, she remains very faithful to him. Generally only low-class men engage in this black art, but if a man born in a higher class does so, after death he is put into the hell known as Lālābhakṣa. There he is immersed in the river known as Śukra-nadī and forced to drink semen.