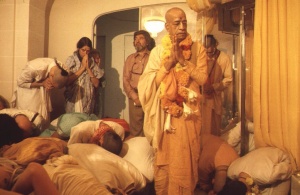 By the arrangement of the Supreme Lord, low-grade living beings like bugs and mosquitoes suck the blood of human beings and other animals. Such insignificant creatures are unaware that their bites are painful to the human being. However, first-class human beings—brāhmaṇas, kṣatriyas and vaiśyas—are developed in consciousness, and therefore they know how painful it is to be killed. A human being endowed with knowledge certainly commits sin if he kills or torments insignificant creatures, who have no discrimination. The Supreme Lord punishes such a man by putting him into the hell known as Andhakūpa, where he is attacked by all the birds and beasts, reptiles, mosquitoes, lice, worms, flies, and any other creatures he tormented during his life. They attack him from all sides, robbing him of the pleasure of sleep. Unable to rest, he constantly wanders about in the darkness. Thus in Andhakūpa his suffering is just like that of a creature in the lower species.

From this very instructive verse we learn that lower animals, created by the laws of nature to disturb the human being, are not subjected to punishment. Because the human being has developed consciousness, however, he cannot do anything against the principles of varṇāśrama-dharma without being condemned. Kṛṣṇa states in Bhagavad-gītā (BG 4.13), cātur-varṇyaṁ mayā sṛṣṭaṁ guṇa-karma-vibhāgaśaḥ: "According to the three modes of material nature and the work ascribed to them, the four divisions of human society were created by Me." Thus all men should be divided into four classes—''brāhmaṇas, kṣatriyas, vaiśyas and śūdras—and they should act according to their ordained regulations. They cannot deviate from their prescribed rules and regulations. One of these states that they should never trouble any animal, even those that disturb human beings. Although a tiger is not sinful if he attacks another animal and eats its flesh, if a man with developed consciousness does so, he must be punished. In other words, a human being who does not use his developed consciousness but instead acts like an animal surely undergoes punishment in many different hells.