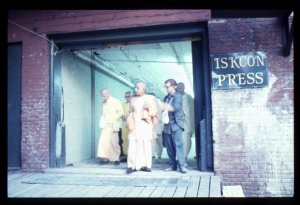 If a person deviates from the path of the Vedas in the absence of an emergency, the servants of Yamarāja put him into the hell called Asi-patravana, where they beat him with whips. When he runs hither and thither, fleeing from the extreme pain, on all sides he runs into palm trees with leaves like sharpened swords. Thus injured all over his body and fainting at every step, he cries out, "Oh, what shall I do now! How shall I be saved!" This is how one suffers who deviates from the accepted religious principles.