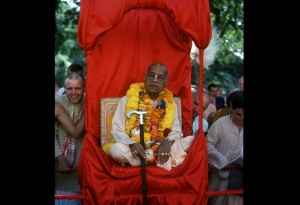 Satī continued: If one hears an irresponsible person blaspheme the master and controller of religion, one should block his ears and go away if unable to punish him. But if one is able to kill, then one should by force cut out the blasphemer's tongue and kill the offender, and after that one should give up his own life.

The argument offered by Satī is that a person who vilifies a great personality is the lowest of all creatures. But, by the same argument, Dakṣa could also defend himself by saying that since he was a Prajāpati, the master of many living creatures and one of the great officers of the great universal affairs, his position was so exalted that Satī should accept his good qualities instead of vilifying him. The answer to that argument is that Satī was not vilifying but defending. If possible she should have cut out Dakṣa's tongue because he blasphemed Lord Śiva. In other words, since Lord Śiva is the protector of religion, a person who vilifies him should be killed at once, and after killing such a person, one should give up one's life. That is the process, but because Dakṣa happened to be the father of Satī, she decided not to kill him but to give up her own life in order to compensate for the great sin she had committed by hearing blasphemy of Lord Śiva. The instruction set forth here in Śrīmad-Bhāgavatam is that one should not tolerate at any cost the activities of a person who vilifies or blasphemes an authority. If one is a brāhmaṇa he should not give up his body because by doing so he would be responsible for killing a brāhmaṇa; therefore a brāhmaṇa should leave the place or block his ears so that he will not hear the blasphemy. If one happens to be a kṣatriya he has the power to punish any man; therefore a kṣatriya should at once cut out the tongue of the vilifier and kill him. But as far as the vaiśyas and śūdras are concerned, they should immediately give up their bodies. Satī decided to give up her body because she thought herself to be among the śūdras and vaiśyas. As stated in Bhagavad-gītā (BG 9.32), striyo vaiśyās tathā śūdrāḥ. Women, laborers and the mercantile class are on the same level. Thus since it is recommended that vaiśyas and śūdras should immediately give up their bodies upon hearing blasphemy of an exalted person like Lord Śiva, she decided to give up her life.