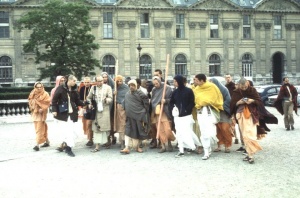 Following the order of Lord Brahmā, all the Pracetās accepted the girl as their wife. From the womb of this girl, the son of Lord Brahmā named Dakṣa took birth. Dakṣa had to take birth from the womb of Māriṣā due to his disobeying and disrespecting Lord Mahādeva [Śiva]. Consequently he had to give up his body twice.

In this connection the word mahad-avajñānāt is significant. King Dakṣa was the son of Lord Brahmā; therefore in a previous birth he was a brāhmaṇa, but because of his behaving like a non-brāhmaṇa (abrāhmaṇa) by insulting or disrespecting Lord Mahādeva, he had to take birth within the semen of a kṣatriya. That is to say, he became the son of the Pracetās. Not only that, but because of his disrespecting Lord Śiva, he had to undergo the tribulation of taking birth from within the womb of a woman. In the Dakṣa-yajña arena, he was once killed by Lord Śiva's servant, Vīrabhadra. Because that was not sufficient, he again took birth, from the womb of Māriṣā. At the end of the Dakṣa-yajña and the disastrous incidents there, Dakṣa offered his prayer to Lord Śiva. Although he had to give up his body and take birth from the womb of a woman impregnated by the semen of a kṣatriya, he received all opulence by the grace of Lord Śiva. These are the subtle laws of material nature. Unfortunately, people in this modern age do not know how these laws are working. Having no knowledge of the eternity of the spirit soul and its transmigration, the population of the present age is in the greatest ignorance. Because of this, it is said in Bhagavad-gītā (1.1.10): mandāḥ sumanda-matayo manda-bhāgyā hy upadrutāḥ. The total population in this age of Kali-yuga is very bad, lazy, unfortunate and disturbed by material conditions.