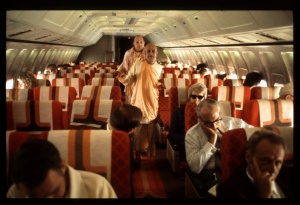 My dear young wife, certainly friends and relatives offer mutual greetings by standing up, welcoming one another and offering obeisances. But those who are elevated to the transcendental platform, being intelligent, offer such respects to the Supersoul, who is sitting within the body, not to the person who identifies with the body.