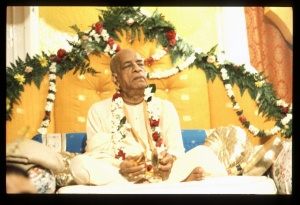 There is an English proverb that says, "The face is the index of the mind." If one is angry, his anger is immediately expressed in his face. Similarly, other mental states are reflected by the actions of the gross body. In other words, the activities of the gross body are reactions of the mental condition. The mind's activities are thinking, feeling and willing. The willing portion of the mind is manifest by the activities of the body. The conclusion is that by the activities of the body and senses, we can understand the condition of the mind. The condition of the mind is affected by past activities in the past body. When the mind is joined with a particular sense, it immediately becomes manifest in a certain way. For instance, when there is anger in the mind, the tongue vibrates so many maledictions. Similarly, when the mind's anger is expressed through the hand, there is fighting. When it is expressed through the leg, there is kicking. There are so many ways in which the subtle activities of the mind are expressed through the various senses. The mind of a person in Kṛṣṇa consciousness also acts in a similar way. The tongue chants Hare Kṛṣṇa, the mahā-mantra, the hands are raised in ecstasy, and the legs dance in Kṛṣṇa consciousness. These symptoms are technically called aṣṭa-sāttvika-vikāra (CC Antya 14.99). Sāttvika-vikāra is transformation of the mental condition in goodness or sometimes transcendental ecstasy.