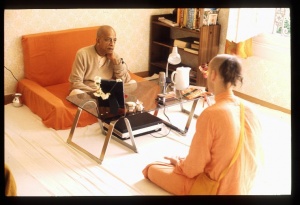 My dear King Barhiṣmān, you should never out of ignorance take to the Vedic rituals or to fruitive activity, which may be pleasing to hear about or which may appear to be the goal of self-interest. You should never take these to be the ultimate goal of life.

"Men of small knowledge are very much attached to the flowery words of the Vedas , which recommend various fruitive activities for elevation to heavenly planets, resultant good birth, power, and so forth. Being desirous of sense gratification and opulent life, they say that there is nothing more than this."

Generally people are very much attracted to the fruitive activities sanctioned in the Vedic rituals. One may be very much attracted to becoming elevated to heavenly planets by performing great sacrifices, like those of King Barhiṣmān. Śrī Nārada Muni wanted to stop King Barhiṣmān from engaging in such fruitive activities. Therefore he is now directly telling him, "Don't be interested in such temporary benefits." In modern civilization people are very much interested in exploiting the resources of material nature through the methods of science. Indeed, this is considered advancement. This is not actually advancement, however, but is simply pleasing to hear. Although we are advancing according to such concocted methods, we are forgetting our real purpose. Bhaktivinoda Ṭhākura therefore says, jaḍa-vidyā yata māyāra vaibhava tomāra bhajane bādhā: "Materialistic studies are the glare of māyā only, for they are an obstacle to spiritual progress."